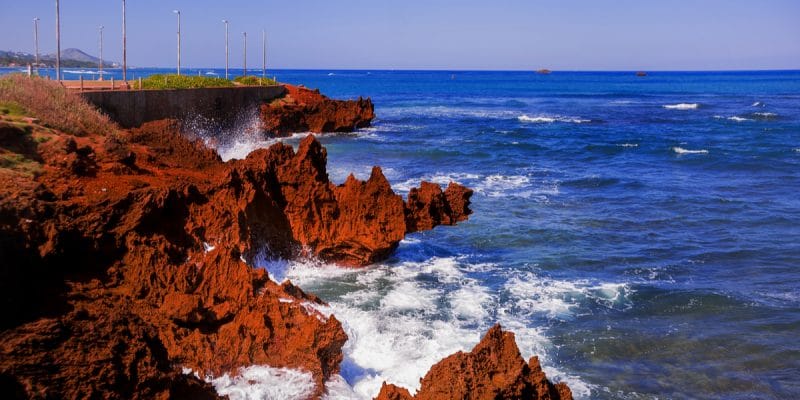 The dredging company Jan De Nul has already deposited 440,000 tonnes of rock on the west coast of Benin; objective achieved for the first part of the project to build a 6-kilometre submerged dike to protect and restore the coastal area of Ouidah, located in southern Benin.

Work to protect and enhance the priority segment of the coast in the commune of Ouidah, in southern Benin, could be delivered before the 24-month implementation period. This is because the construction site is progressing at an exponential rate. Four months after its launch on December 6, 2018, more than a third of the work was completed. The dredging company (operation consisting in extracting the materials located on the bottom of a body of water), the Luxembourg group Jean De Nul, made public on April 15, 2019, the latest update of the progress of the work.

A first 2 km submerged dike was built on the Avlékété coast in the Ouidah district. In 132 days, 440,000 tonnes of rock were deposited in the Atlantic Ocean, 150 metres offshore.

Further work includes the construction of a second 2 km dike at Avlékété. Then, a third dam of equal dimensions will be installed this time off the Jégbadji coast.

Of the 1,200,000 tonnes of granite blocks needed to build Ouidah’s three submerged dikes, 400,000 will come from an identified quarry in Norway.

With an overall cost of close to 119 million euros, or 78 billion CFA francs, the work to protect and enhance the priority coastal segment in Ouidah also includes the recharging of the beach by dredging and refilling of marine sand (1,775,000 m3) as well as the disposal of 323,408 m3 of dredging sand for use as a sedimentary reserve.

At the launch of this project, the Minister of the Living Environment and Sustainable Development, José D. Tonato, recalled that the government’s objective was to contain the advance of the sea on the west coast of Benin by 2021, by definitively solving the problem of coastal erosion and the damaging effects of climate change such as floods.

This major work creates many direct and indirect jobs in the south of the country. In its action programme, the government has provided for the construction of a 4 km-long beach in the Avlékété area, which will enable the development of hotel infrastructure and tourism development activities.