Amandine Hersant: “We will plant 2,500,000 mangrove trees in Cameroon” 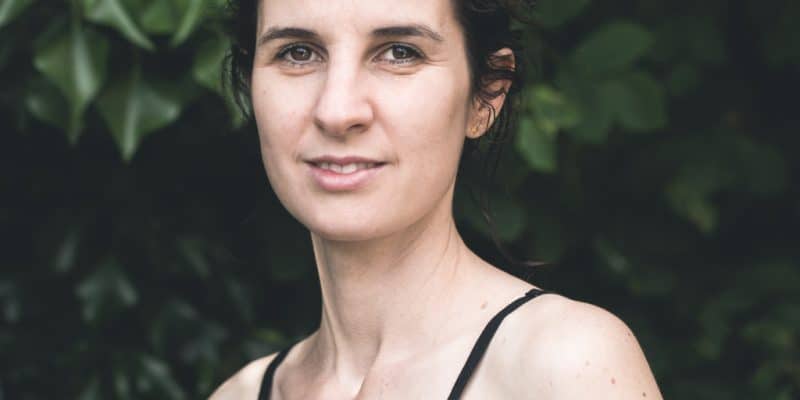 Restoration of mangrove forests, development of agroforestry, beekeeping and exploitation of wild silk ... In this interview, Amandine Hersant, the director of the environmental protection organization Planète Urgence explains the need for its new project of reforestation of mangrove forests in the Littoral region of Cameroon. This initiative supported by local authorities is one of many projects implemented by Planète Urgence in Cameroon and Madagascar.

Jean Marie Takouleu: You are in Cameroon to prepare the realization of a project of restoration of the mangrove in the littoral. What is the interest for a country like Cameroon to preserve or restore its mangrove forests?

Amandine Hersant: Forests in general are ecosystems at the heart of environmental issues, and in particular climate issues, since they are the world’s second largest carbon sink after the oceans. Forests are also home to 80 % of the world’s biodiversity. Finally, there is a very strong interdependence with the populations who find medicine, wood for cooking, non-wood products, etc. There is therefore a real urgency to protect forests that are rapidly disappearing. We are losing about the same area of forest as the Netherlands (41,543 km², editor’s note) every year in the world.

There are three areas of tropical forests that are experiencing a very alarming rate of deforestation: The Amazon rainforest, which we hear a lot about, Southeast Asia, particularly Indonesia, and the Congo Basin. Cameroon represents the second largest forest in the Congo Basin. Beyond the Cameroonian rainforest, the country hosts a very important mangrove area. The mangrove is home to an exceptional biodiversity. It is also a buffer zone that protects populations against extreme weather conditions such as rising water levels caused by climate change. And the mangroves that make up these ecosystems have a much greater capacity to store CO2 than in temperate forests, for example.

And if you intervene, it means that there has been degradation. What is the cause of this situation on the Cameroonian coast?

There are several explanations. The Cameroonian coastline is experiencing a strong urban expansion. I talked about this with the mayor of Douala (Roger Victor Mbassa Ndine) a few days ago. The city is growing horizontally, with extremely complex land management. As a result, land is gradually being grabbed by the city. There is also the issue of cutting for wood for cooking. Mangrove wood is used a lot for smoking fish, for example, because it gives it a special flavour. Finally, there are large industrial projects that impact the mangrove. 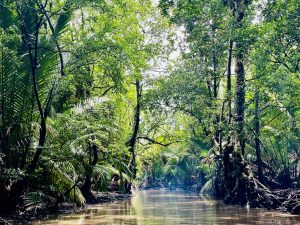 Each time, it is absolutely necessary to approach the areas of intervention in a specific way to know where the problem comes from and how to remedy it.

You intend to launch a project to restore this mangrove ecosystem in Cameroon. What does your project consist of?

We have already worked on a pilot project with the Cameroon Wildlife Conservation Society (CWCS) of Dr. Gordon Ajonina who is an internationally recognized researcher on the subject of mangroves. We worked together on the reforestation of 66,000 feet of mangroves, on 4 hectares. It worked, and so we are going to expand to a hundred hectares. We are working with local communities, as well as three partners: The Watershed Task Group (WTG), Cameroon Ecology (Cam-Eco) and the CWCS. We will plant a total of 2,500,000 mangroves.

How will the growth of the young plants be monitored?

This is the biggest challenge of the project, since there is no point in planting trees if we are not able to ensure that they will be there in 30 years. Over this period, the contexts may change significantly, with human and climatic pressures that will probably increase. There is a real issue of securing plots. This is why we are involving as many actors as possible, particularly institutional actors, local leaders and other NGOs. Our objective is to create community forests around the restoration areas so that the local people can take ownership of the sustainable management of the forests and see their economic and preservation interests in it.

The real criticism of NGOs working in Africa is the exclusion of local communities in biodiversity conservation areas. Your project is implemented in the Cameroonian coastline, how do you intend to ensure that fishing communities can continue to benefit from the resource to process their fishery products?

This is crucial. And I think that what makes the DNA of the association Planète Urgence is precisely to act on the strengthening of humans for a planet of solidarity and sustainability. We start from the principle that the main actor to be involved is first and foremost the local community, so that with our support, it can find its own solution for preservation. This is why we work with NGOs that are already active in the field and know the communities very well.

Smoking fish is vital for the communities. However, they need to be allowed to do it differently, for example by using improved stoves that allow them to smoke the same amount of fish, but with less wood.

So, you are guaranteeing that local communities will be able to continue to harvest wood from the mangrove?

In any case, the communities need wood on a daily basis, so it is not a question of prohibiting it, but of proposing solutions for sustainable forest management. We are working on the idea of developing community forests. These are areas of several hectares subdivided into plots with a system of rotating uses according to needs: conservation, market gardening, agroforestry, housing, fishing, ecotourism, wood-energy…

Where are you with your project on the ground?

We are in the very early stages of the project. We started with the identification of the zones. Last week we met with the local chiefs to see if there was any interest on their part. It turns out that there is a real local interest in this project because there is a real economic and environmental need. And we’re going to try to meet that need in the next few months.

When will you start planting trees?

We must follow the rhythm of the seasons. The collection of mangroves starts in March with the arrival of the rains. The idea is to have everything planted before the rains, so by July.

In the north of Cameroon, the problem is completely different from the coast. We work around the Benue National Park where there is strong human pressure with the massive arrival of populations in the region, which have damaged the forests around the national parks. We know that animals need to use ecological corridors to go from one park to another with sufficient vegetation present. We also know that we need to be able to accompany the communities that are settled and offer them opportunities for income-generating activities. 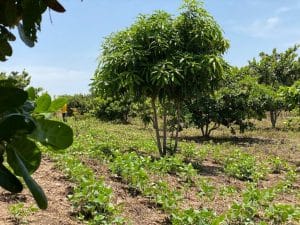 As a result, we have started a project in 2019 with the Center for Forestry Agroforestry Resources and Continuing Education (CERAF), a local organization, to initiate local cashew nut production through agroforestry, mixing cashew nuts that will produce after 4 or 5 years with the cultivation of beans, tomatoes or corn, for example, to be able to generate short-term income. We have already planted 300,000 cashew trees that will reinforce biodiversity corridors so that animals, such as monkeys, can move from one park to another. This year, the first nuts were produced. The next step will be the structuring of a fair and equitable chain for the producers and the scaling up of the project.

In Madagascar, you support the production of wood energy and beekeeping. Why support these sectors in connection with reforestation?

In Madagascar, deforestation is linked to wood cutting, mostly for cooking, especially in the Itasy region. Only 7% of the forests in this region remain. It is therefore necessary to preserve the existing forests, and to restore the forests of tapia, an endemic tree of Madagascar. At the same time, we must find solutions for wood energy. We will therefore create wood-energy forests, with sustainable forest management. To protect the tapia forests, we will create income-generating activities such as wild silk or beekeeping. The communities have understood the importance of protecting the forests since they are the ones who will bring back honey and will host the wild silkworm called “Landibé”. 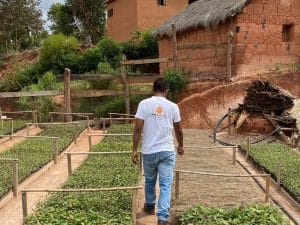 We also work with community groups to build their operational capacity to preserve the forests. These groups then create forest management plans based on the needs of the people.

Among the driest regions of the continent are Southern Africa, the Sahel and the Horn of Africa. The need for reforestation is very great there. Why aren’t you working there?

We would like to cover more areas, but we need the financial capacity to do so. In the long term, perhaps we will succeed. We are going to do it gradually. Our objective is above all to work well in the countries where we are already working in order to have a quality impact on the forests and on the women and men who live there.