Homepage » AFRICA: Water management, a key issue for biodiversity
This article is part of the dossier
WORLD WATER DAY 2021 : WATER AND SANITATION IN AFRICA 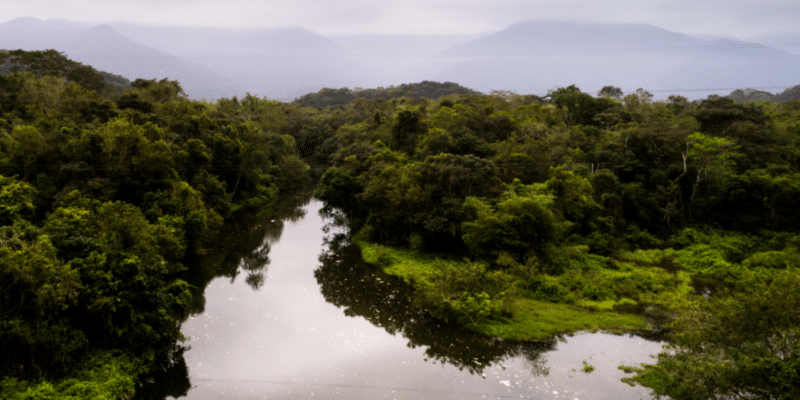 Africa has remarkable biodiversity. According to estimates by researchers at the Intergovernmental Platform on Biodiversity and Ecosystem Services (IPBES), it is home to one fifth of all known species of mammals, birds and plants. However, this biological potential is under threat, particularly due to deteriorating water quality and scarcity. Water is an essential component of living beings and remains the subject of many crises in Africa. Its concerted and sustainable management is not yet achieved in several regions of the continent.

The importance of biodiversity in the sustainable and integrated management of water resources is very often overshadowed by the urgent need to satisfy vital human needs, such as access to drinking water. And yet the maintenance of biodiversity, which is just as essential for the sustainable development of the African continent, is also dependent on water management.

According to the International Union for Conservation of Nature (IUCN), 25% of the world’s mammal species and 11% of birds are directly threatened with extinction. For other biological groups, which are less well known, the same source predicts the extinction of 25-50% of all species by the end of the century if no appropriate measures are taken. This will be the 6th extinction caused by human activities and development, in reference to the 5 major extinctions due to natural causes that have previously marked the history of life on Earth.

This rapid erosion of biodiversity is closely linked to the water crisis, both in terms of quality and quantity. The causes of this phenomenon are both immediately human and climatic in origin: extreme drought events, floods and high water, deforestation and destruction of wetlands. Added to this is the drama of pollution of coastal areas, seas and oceans by human activities, mainly carried by rivers.

In view of the close link between biodiversity and the availability of water resources, the United Nations (UN), in the context of its Sustainable Development Goals (SDGs) for 2030, is now dedicating the preservation of freshwater reserves, which are centres of biodiversity. Indeed, SDG 6 prescribes the protection and restoration of water-related ecosystems, including mountains, forests, wetlands, rivers, aquifers and lakes.

Africa is particularly concerned by this goal. The continent most vulnerable to climate change has not only impressive freshwater reserves, but also a rich and dense biodiversity, which it will need to preserve.

Biodiversity is the sum total of all forms of life. For a scientist, it is all the variety of life studied at three levels: ecosystems, the species that make up the ecosystems, and the genes found in each species. Africa, which occupies almost 20.2% of the total land area, has a variety of ecosystems, including deserts and drylands with exceptional flora and fauna. The 17th session of the African Ministers’ Conference on the Environment, held on September 30th, 2019, mentioned savannahs with the highest diversity of ungulates in the world (a category of mammals with one or more hooves at the end of their limbs), tropical forests, mangrove forests in southern Mauritania, in the Saloum delta in Senegal, parts of Sudan and countries in Central Africa, tropical dry and humid forests, island and coastal ecosystems, wetlands around freshwater bodies such as rivers, lakes and estuaries, urban and semi-urban systems and agro-ecosystems, and marine ecosystems. Africa has 119 terrestrial ecological regions and 93 freshwater or wetland ecological regions.

Affected by human factors and the negative effects of climate change, Africa’s biodiversity is as threatened as that of the rest of the planet. “Africa’s development and future are at risk if urgent action is not taken now to protect biodiversity, including more than one million plant and animal species that are threatened with extinction, 40% of amphibian species and 33% of coral reefs that are at risk,” warns Al-Hamndou Dorsouma, Head of the Climate and Green Growth Division at the African Development Bank (AfDB).

The African continent has immense water resources. Statistics published in 2019 by the African Water Association show that the continent has more than 660 000 cubic kilometres (km3) of groundwater. Much of this underground water supply is located at depths of more than 50 metres, particularly in the Saharan areas. These are, for example, fossil waters dating from prehistoric times, which do not renew themselves. As far as surface water is concerned, the same source indicates that in Africa, three lakes have 30% of the world’s freshwater reserves: Lake Tanganyika (32,900 km², located in Tanzania), Lake Victoria (68,100 km², it crosses Uganda, Kenya and Tanzania), and Lake Malawi (29,500 km², its shores are shared between Malawi, Mozambique and Tanzania).

These freshwater reserves, which are havens for local flora and fauna, are however unevenly distributed and degraded due to a lack of sustainable and integrated management. According to UN figures, only 4% of water reserves are exploited in Africa, and the lack of sanitation infrastructure causes losses estimated at some 28.4 billion dollars per year, or nearly 5% of the continent’s gross domestic product (GDP). The United Nations has called for massive investment in water and sanitation infrastructure. This would also help preserve the environment, as 85% of wastewater from human activities is currently discharged into the environment without treatment.

On the occasion of the World Environment Day 2020, the AfDB has followed suit. The pan-African financial institution called on African leaders to adopt bold policies and invest in nature-based solutions that would reduce the pressure of agriculture on water resources (the activity consumes 70% of the 3900 km3 taken from rivers and aquifers each year, according to the Food and Agriculture Organisation [FAO]), promote the restoration/rehabilitation of degraded systems and water resources, and reduce the impacts of extractive industries and unsustainable water use.