AFRICA: Vegetation cover is burning up 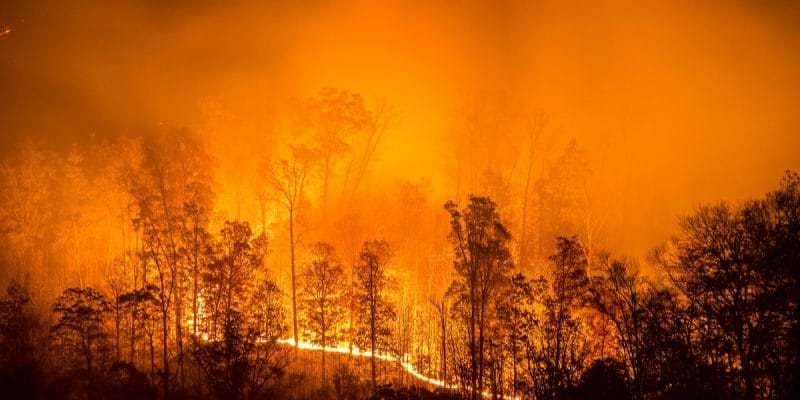 Recent aerial views taken by the NASA show an Africa on fire. The central and south-eastern parts of the continent are particularly affected by bushfires. Yet the G7 has only focused on the Amazon forest in South America, while Africa alone accounts for nearly 70% of the world's burnt land.

A major challenge is the interactive fire map produced by the American Space Agency (NASA). As the world’s seven most powerful nations (G7) express their concern about the ongoing fires in South America’s Amazonian forest, with 22 million euros in emergency aid, a map of NASA, produced on August 26, 2019, draws attention to Africa. It clearly shows that central and south-eastern Africa are much more affected by forest fires than in the Amazon.

The red dots symbolising the sources of fire are more massive and dense than anywhere else, leaving the image of a burning continent to appear. These fire outbreaks have been identified in Angola, Zambia, the Democratic Republic of Congo, Tanzania, Mozambique and Madagascar. 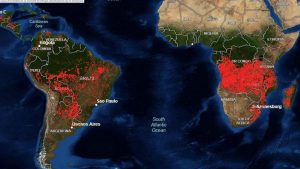 According to Djimanga Diédhiou, regional water and forest inspector of Sédhiou in southwest Senegal, the perpetrators of these bushfires are charcoal makers, honey collectors, hunters, smugglers who seek to escape customs patrols, slash-and-burn farming, pasture renewal, and the recklessness of smokers and campers. Fires are also deliberately caused by bandits or cattle thieves just after their crimes, especially in border areas with Guinea-Bissau and Gambia. The inspector points out that “the lack of cooperation from local populations complicates the identification of fire setters”.

There is a lack of resources as well

In addition to the long and severe dry seasons, and dangerous farming methods (slash-and-burn agriculture), bushfires spread in Africa due to lack of resources. In Bounkiling for example, a town in Middle Casamance in southwest Senegal, where committees are equipped with rudimentary tools, such as wheelbarrows, shovels, rakes, and others, to extinguish bush fires. The region has only one fire response unit. And it only has a small tank that helps it to handle the requests.

The lack of resources and the under-equipment of agents does not facilitate the fight against forest fires in sub-Saharan Africa. As South America has benefited from the G7 assistance, the African continent also needs resources such as Canadairs. They are water bomber (WB) aircraft, very effective in fighting forest fires.

Moreover, the European Space Agency (ESA) considers that 70% of the world’s burnt land is located in sub-Saharan Africa. She went on to note that African fires are estimated to account for 25-35% of Africa’s greenhouse gas emissions to the atmosphere. A forest fire produces greenhouse gases and at the same time releases CO2 previously stored by trees. In doing so, it contributes to global warming, of which the African continent is the first victim. In addition, it deprives local populations of the many ecosystem services provided by forests, primarily water retention.