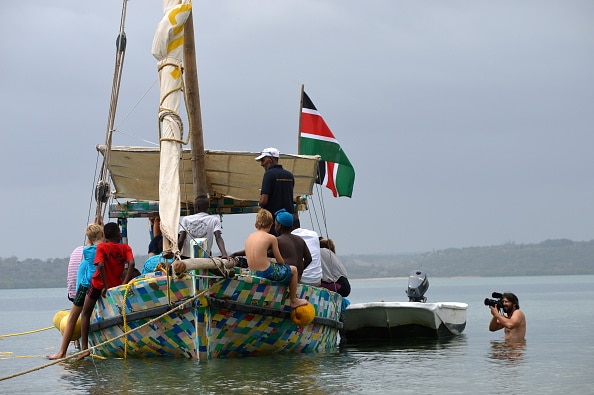 The Flipflopi, a 9m long boat made from 10 tons of plastic waste collected on the Kenyan coast, will be the showcase for an awareness program in Africa. The aim of the initiative, which will last several months, is to raise awareness during a trip of the harmful consequences of plastic pollution that threatens the freshwater ecosystem of Lake Victoria.

Save Lake Victoria, Africa’s largest freshwater lake”. This is the goal of the plastic pollution awareness program that was recently launched in Kenya by the designers of Flipflopi. It is a 9-meter long boat made from 10 tons of plastic waste collected during beach clean-ups along the Kenyan coast.

Awareness will be raised during an expedition. “The boat will stay in the town of Kisumu, in western Kenya for three months to allow local people to take a look at it. We hope that when they see our eco-friendly boat, they will see that it is possible to recycle plastic waste,” explains SkandAli Skanda, one of the initiators of the Flipflopi project. The boat will then sail around Lake Victoria, passing by the island of Mfangano in western Kenya. The third stage will be Uganda and the last one, Tanzania.

In these different stops, SkandAli Skanda and his team, in collaboration with the United Nations Environment Programme (UNEP), plan to present the consequences of plastic pollution on the health of the Lake Victoria ecosystem; as well as on the health of more than 40 million people who depend on the livelihoods from this lake. They also plan to engage communities on the traditional principles of the circular economy regarding plastic and non-plastic pollutants through education and sharing of experiences, and to showcase local innovations.

In addition, the outreach program aims to petition all member states of the East African Community to reach a regional consensus on banning non-essential single-use plastics.

This is the ship’s second trip after its first expedition two years ago (in September 2018). It was launched in Lamu, Kenya for the country’s Clean-up Day celebrations. The Flipflopi had then sailed to Zanzibar in Tanzania.