Homepage » AFRICA: sustainable tourism and biodiversity, a marriage of reason

AFRICA: sustainable tourism and biodiversity, a marriage of reason 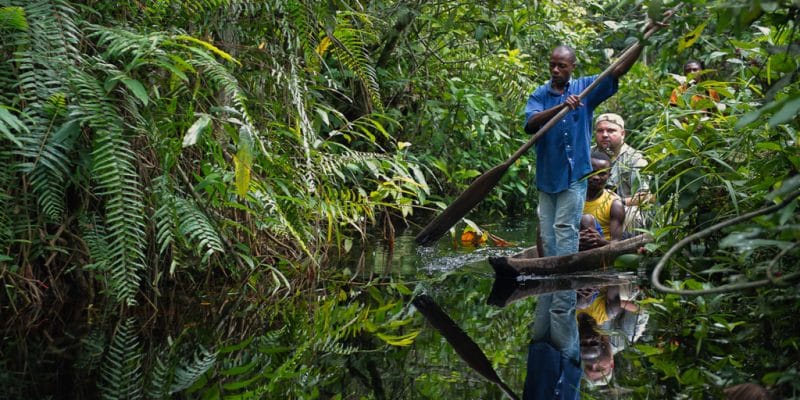 In Africa, sustainable tourism is a solution advocated by various actors to protect and make biodiversity profitable. Initiatives already in place are helping to reduce animal abuse, CO2 emissions through renewable energy, and the use of plastic waste at tourist sites.

In Africa, tourism is closely linked to the destruction of biodiversity (plant and animal). Although this profitable activity, which is sometimes crucial to the economic development of the region, cannot be stopped for good, governments and tourism companies are now advocating more sustainable practices.

The French hotel group Accor wants to remove all single-use plastic items from the guest experience in its 3,358 hotels, 116 of which are in Africa, by 2022. On March 4th, 2021, Accor joined “The Pledge“. The sustainable tourism programme, designed and launched in 2019 by the United Nations Educational, Scientific and Cultural Organisation (UNESCO) in partnership with the Tourism Authority of Thailand and global travel platform Expedia, promotes responsible practices, community resilience and heritage conservation.

In Africa, plastic pollution has reached alarming proportions. Morocco alone exceeds one million tonnes of plastic waste produced each year. Over 33% of this waste is dumped in uncontrolled landfills. Plastic waste also ends up on the Kingdom’s marine beaches, decimating aquatic species. To encourage better management of this type of waste in Morocco and in many other countries around the world, the Mohammed VI Foundation for the Protection of the Environment and the International Foundation for Environmental Education (FEE) have, since 2012, been labelling beaches that raise awareness among tourists of the need to adopt sustainable practices, particularly in terms of waste management. This is the case for cigarette butts, bottles, food packaging, polystyrene fragments, plastic bags, fishing equipment, bottle caps, cotton buds and lollipop sticks. 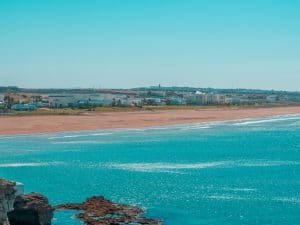 In 2020, 26 Moroccan Blue Flag beaches were identified by a blue flag. The labelled municipalities in Morocco take over the complete management of the beaches that fall within their perimeter. In addition, these municipalities are supported by the “Clean Beaches” programme of the Mohammed VI Foundation for the Protection of the Environment, supported by the General Directorate of Local Authorities, the ministerial departments concerned and economic partners who provide managerial skills and financial support.

While some companies and operators focus on a specific aspect of biodiversity preservation, others offer a complete “nature” service.

Unlike conventional hotel offerings, Beyond Green hotels will provide guests with “meaningful experiences”. Preferred Hotels’ sustainable tourism approach includes the use of renewable energy instead of fossil fuels, reducing electricity bills and greenhouse gas emissions from the massive use of fossil fuels (gas, oil, coal, etc.). Beyond Green hotels are also committed to protecting the natural and cultural heritage, and contributing to the social and economic well-being of local communities. 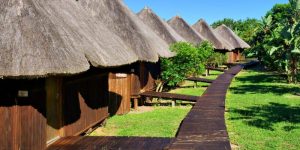 Stays based on sustainable and environmentally friendly tourism©Photosky/Shutterstock

Luxury Green Resorts, owned by the Gabonese Strategic Investment Fund (FGIS) and Singaporean hotelier Amanresorts, also offers tourists more biodiversity-friendly holidays. The project, entitled “African Ecotourism Safari“, will allow the construction of eco-lodges (tourist accommodation designed to have the least possible impact on the natural environment in which it is located) in Gabon’s 13 national parks, notably in Loango in the south of the country, in Moukalaba Doudou in the south-west, in Lopé and Ivindo in the east, and in Pongara located in the west of the country, near Libreville.

These changes, which are imposed on tourists, sometimes in spite of themselves, also help to reduce animal abuse. In Africa, ecotourism also generates jobs and income, thus increasing the incentive to play the conservation card.

Wildlife crime has reached alarming proportions in Africa. According to the second report on wildlife crime, published on July 10th, 2020 by the United Nations Office on Drugs and Crime (UNODC), an elephant is killed every 25 minutes in Africa for its tusks. The same applies to rhinos, of which 4 are killed every day in Africa. Other animal species are also affected by poaching.

To help protect the environment, in addition to optimising its water consumption, which should be “reduced by 50%”, the American hotel group Hilton is making tourists visiting its establishments, particularly in Africa, aware of the WTTC’s Buenos Aires declaration on travel. The project, called “Big Five”, aims to involve tourism stakeholders in the fight against the wildlife trade.

The Big Five initiative follows the recent launch of Hilton’s ‘Travel with Purpose 2030’ goals of doubling the company’s social investment and halving its global environmental footprint.

In Africa, animal abuse is also present in tourist transport. In the North African region, for example, horses and camels are still used in the tourist circuit. In April 2019, the Asia branch of the animal protection NGO Peta (People for the Ethical Treatment of Animals) published an investigation revealing the mistreatment of camels and horses in the transport of tourists around the pyramids “beatings, dehydration, We don’t know the exact figures, but it is estimated that several hundred horses and dromedaries are mistreated on these Egyptian tourist sites,” deplored Anissa Putois of the NGO Peta France the same year. 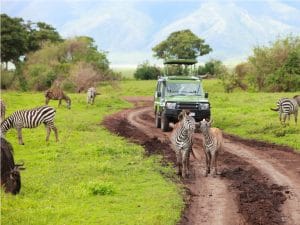 A tourist car driving through the forest©BlueOrange Studio/Shutterstock

In addition to the Peta report, the mistreatment of animals in the tourist circuit has been denounced by more than 500,000 animal rights activists, prompting the Egyptian government to act. The Ministry of Tourism recently announced its intention to use electric buses, an environmentally friendly option, to transport visitors to the country’s main tourist sites and archaeological areas. This measure is aimed at preserving the animals that are under the weight of tourism. The electric vehicles will also help reduce greenhouse gas emissions, the main cause of climate change.