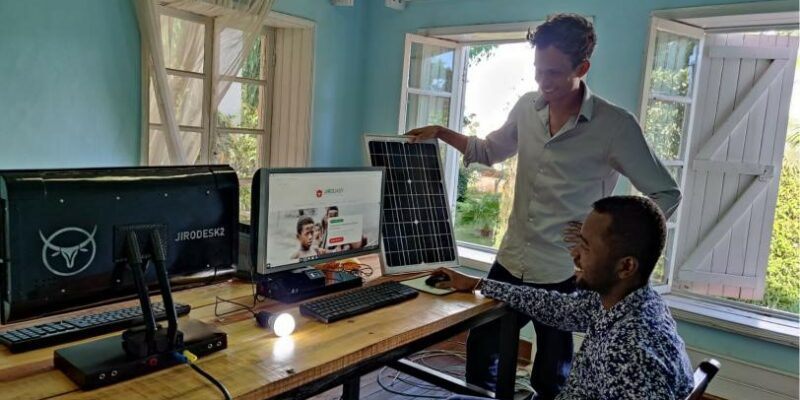 How to improve digital access in schools and rural areas in Africa? This is the question that the Madagascan start-up Jirogasy wants to answer through a partnership recently signed with Aceleron, a company based in Birmingham, England. The two partners have thus chosen to pool their respective technologies to achieve their goal of digital literacy.

Jirogasy brings Jirodesk 2 to this partnership. This computer was entirely designed and produced by the young company in Madagascar. Running entirely on solar energy, Jirodesk 2 is designed mainly for rural areas where the rate of access to electricity is often low in Africa. This solar-powered computer will be combined with batteries to store the electricity needed to operate it at night or in bad weather. This equipment is supplied by Aceleron, which manufactures them in Kenya from waste solar lanterns and lithium-ion batteries.

The young company has already signed a partnership with the Franco-Malagasy non-governmental organisation (NGO) AccesMad to provide solar computers to seven schools, starting in 2021. The two partners want to equip 24 secondary schools in Jirodesk 2, and by 2022, Jirogasy and Aceleron will equip 20 schools with solar computers. The ultimate goal is to contribute to the digital literacy of 10,000 pupils per year in Madagascar and elsewhere in East Africa.

With a view to sustainability and taking into account the situation of schools in rural areas, the two companies will install solar computers with removable batteries. In this way, a faulty component can be easily replaced. “Most of the other batteries are soldered or glued together, which means that they should normally be discarded if one of the parts is malfunctioning. As the computers will be made available to schools that are often difficult to access, the ability to easily access all components and replace them on site provides greater resilience,” says Jirogasy.

Thus, between them, Jirogasy and Aceleron are simultaneously bridging the digital divide to promote local economic development, fighting greenhouse gas emissions with the use of solar energy, combating programmed obsolescence by promoting repairs, and integrating their production into a circular economy project by recycling electronic waste to design their batteries. Who can say better?