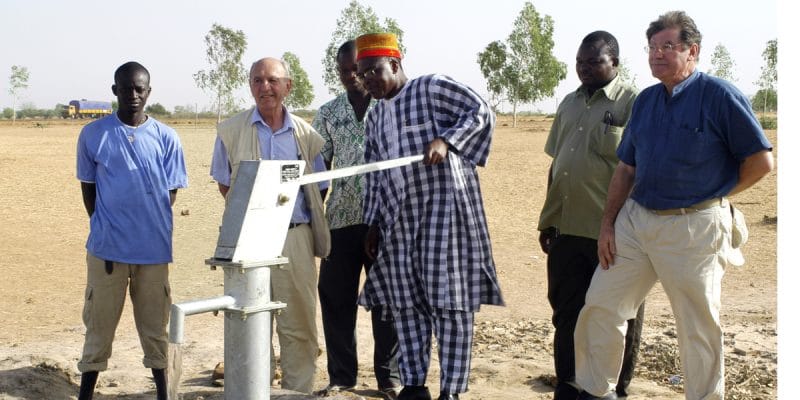 In Africa, funding for the water and sanitation sector remains insufficient and governance of water resources is limited. This makes it difficult, if not impossible, to achieve Sustainable Development Goal 6 (SDG6), and ensure access to water and sanitation for all by 2030.

Access to water and sanitation for all Africans by 2030 remains a goal marked by great uncertainty, as the indicators are in the red. Globally, Africa is home to half of the people who drink water from unprotected sources. Data published in 2019 by the United Nations Department of Economic and Social Affairs (UNDESA) shows that in sub-Saharan Africa, only 24% of the population has access to a safe source of drinking water and that basic sanitation facilities (not shared with other households) are reserved for 28% of the population.

According to World Vision International (WVI), in 2018, nearly eight out of ten African households consumed water contaminated with faecal matter and nearly half of water sources were also affected. The organisation also notes that the phenomenon is generally linked to poverty. The rich are twice as likely to be able to afford clean water as the poor. People living in cities are also more likely to have access to clean water than those living in rural areas.

To reverse this situation, governments and especially international donors regularly allocate various types of funding to the water and sanitation sector in Africa.

According to the World Bank, the capital financing needed to extend water and sanitation services to all, as defined in targets 6.1 and 6.2 of the Sustainable Development Goals (SDGs), amounts to US$114 billion per year between 2015 and 2030. Of the $114 billion needed per year worldwide, sub-Saharan Africa accounts for 31% of the needs.

Based on these estimates, the annual financing needed to provide access to water and sanitation for all in Africa by 2030 is estimated to be €38 billion per year.

The bulk of this capital investment is financed by official development assistance (ODA), user fees and public budgets. According to the Water Coalition, a collective of the main French NGOs (non-governmental organisations) mobilised to promote sustainable access to water and sanitation for all, official aid commitments for water and sanitation in sub-Saharan Africa rose from €1.54 billion to €2.72 billion between 2015 and 2017. Yet in 2017, sub-Saharan Africa received the largest share (32%) of water and sanitation aid commitments of all the MDG target regions (nearly $3 billion), up from 20% in 2015.

Achieving the MDGs on water and sanitation in Africa is also hampered by limited governance of water resources. In Central Africa, for example, the rate of abstraction of water resources is estimated at 0.14%, while the continental average is 5.5%, according to the Global Water Partnership (GWP). According to the global organisation, which provides knowledge and builds capacity for sustainable water resources management, this low rate of water use is due to the absence of water policy documents in half of the countries, and the persistence of tensions and insecurity in some of the arid regions, which undermines transboundary water management. 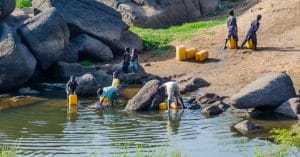 To lighten the gloomy picture of water resources governance in Africa, several actors in the field agree on the need to implement an integrated water resource management (IWRM) strategy. IWRM being a very important strategic framework in the coupled process of achieving the Millennium Development Goals (MDGs) and the sustainable development strategy as advocated at the World Summit on Sustainable Development (WSSD) in Johannesburg in 2002. It is the responsibility of governments to integrate this strategy into their policies. Kofi Anan (former UN Secretary General, 1997-2006) stated at the WSSD that the MDGs should be achieved in each member state through the efforts of governments and people.

A Gire project in Ivory Coast

Access to water is essential not only for human physiological needs, but also for sanitation and even for agriculture, on which 61% of the population of sub-Saharan Africa depends, according to the UN Food and Agriculture Organisation (FAO). In this context, Ivory Coast launched in 2000 the first phase of the institutional support project for the implementation of Gire in the upstream Bandama pilot basin in the north of the country.

The Bandama River basin is a non-transboundary watershed of Ivory Coast, covering an area of 97,500 km2. The 1050 km long Bandama River originates in the north of the country and flows into the Atlantic Ocean at the Grand Lahou lagoon system. However, the Ivorian government’s Gire project applies to the Bandama’s upstream watershed, more specifically upstream of Lake Kossou, an area that includes a series of dams for water supply, for human consumption, for agricultural activities and for industrial activities.

The project, which is due to end this year and is funded by the Loire-Brittany Water Agency (AELB) in France, has three main components. Supporting the process of participatory elaboration of a document of the “Schéma d’Aménagement et de Gestion des Eaux” (SAGE) type, based on ad-hoc governance, ensuring feedback from the project (identification of legal, institutional and financial improvements desirable for the generalisation of the tested practices). It will also be a question of capitalising on the project’s experience at the national level, through workshops and inter-ministerial training in the pilot basin and in Abidjan, the economic capital of this West African country.