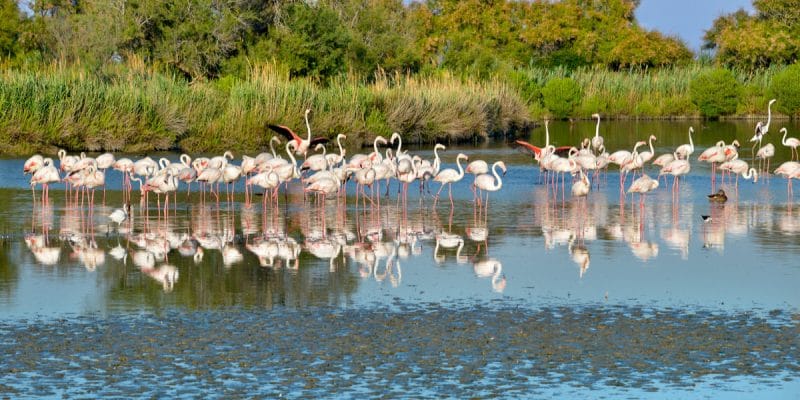 Representatives from 7 Mediterranean countries, NGOs and development agencies launched a wetland conservation project in Tunis. It will be partly financed by the French Development Agency (AFD).

Climate change, human activities…. They are among the factors that cause wetland degradation. Biodiversity loss in a wetland can be caused by intensification of agriculture (e.g. rice cultivation in North Africa), urban development, infrastructure projects, or mineral extraction… These factors also contribute to the loss of many fish species, disrupting the movement of migratory waterbirds such as ducks, geese, and terns.

There are several types of wetland areas in the Mediterranean region. In North Africa, for example, there are oasis, Freshwater Marshes, Coastal Lagoons and Salt Marshes. Seven countries in the Mediterranean area are determined to protect these natural areas. These are Morocco, Algeria, Tunisia, Libya, Turkey, Lebanon and Jordan. They are supported by NGOs, the Tour du Valat Foundation and the French Development Agency. All these stakeholders met on Wednesday, October 10, 2018 in Tunis to launch a major project to protect wetlands.

The objectives of the project

The main objective of the project for the conservation of wetlands in the Mediterranean region is to strengthen the capacities of agents working in organisations to protect wetlands. In the countries concerned by the project, ten associations will be better equipped for their mission. They will serve as a transmission belt for twenty other associations specialising in sustainable development and wetland protection.

Together, these organisations will contribute to the implementation of a “red alert” system to provide support and solutions for highly threatened wetlands. This will be done through the Mediterranean Wetlands Alliance. The project also involves setting up a waterbird counting network to better measure the ecological status of wetlands.

In partnership with civil society, associations and NGOs will also have to develop and implement six micro projects in wetlands with a high biodiversity and cultural heritage value. All these actions will be partly financed by the French Development Agency (AFD), which already supports 3,500 development projects around the world.

It is not the first time that a biodiversity protection project has been launched in the Mediterranean. Several countries in the area have set up the Mediterranean Waterbird Network (Roem) project. The aim is to improve the quality and quantity of data from international waterbird counts (Dioe) that take place each winter across the Mediterranean.