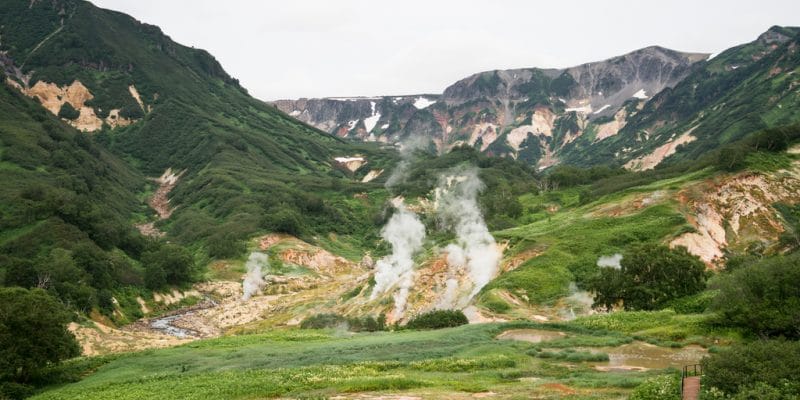 The Ugandan government recently issued permission to Royal Techno Industries to explore two geothermal sites in the Nebbi and Hoima districts in the northwestern part of the country.

Is Uganda’s geothermal potential on its way to being exploited? At least that is the ambition of the exploration project which will start in January 2020. The objective of this work is to determine the level of heat in the subsoil of each geothermal site. The Ugandan government has entrusted the project to Royal Techno Industries.

The company, based in Kira in Uganda, is responsible for digging 16 temperature gradient holes in Kibiro, in the Hoima District, and in Panyimur, in the Nebbi District in the north-west of the country. The work will also determine the locations of future geothermal wells to be used to generate electricity through steam turbines.

According to Vincent Kato, the geothermal energy coordinator at the Ugandan Ministry of Energy, the natural heat from the Nebbi and Hoima subsoil will also be used to heat a pipeline, as well as to dry fish in these localities near Lake Albert, an area that Uganda shares with the Democratic Republic of Congo (DRC).

The contract awarded by the government Royal Techno Industries is worth 2.3 billion Ugandan shillings (about $620 000). The government is funding the project with the financial support of the Geothermal Risk Mitigation Facility (GRMF), a sub-regional organisation established by the African Union (AU) Commission to finance and facilitate the development of geothermal energy in East Africa. The project is also supported by the Kreditanstalt für Wiederaufbau (KfW), the German development agency.

Royal Techno Industries’ explorations mark the beginning of the implementation of projects that will lead to the exploitation of Uganda’s geothermal potential. Thanks to this renewable energy source, this East African country could produce 1,500 MW of electricity. The potential is already attracting specialised companies, some of which have been awarded concessions.

One example is Moto Geothermal Projekt, which holds a licence to exploit geothermal energy at the 28.1 km2 Ihimbo site in the Rukungiri district of south-western Uganda, not far from Lake Edward.

KENYA: Olkaria I geothermal power plant to gain 83 MWe before end of 2021