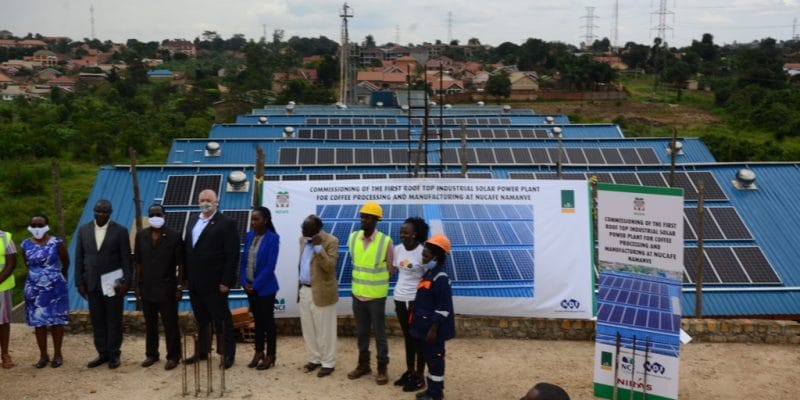 A 172 kWp solar power plant is now operational at the National Union of Coffee Agri business and Farm Enterprise (Nucafe) coffee processing plant in central Uganda. The solar photovoltaic system was installed on the roof of the factory by Village Energy and Bitcom Delta. The two Kampala-based companies worked on behalf of Astonfield Solar, which was awarded the Engineering, Procurement and Construction (EPC) contract for the solar power plant.

The National Union of Coffee Agri business and Farm Enterprise (Nucafe) has a coffee processing plant 17 km from the Ugandan capital, Kampala, whose operation requires permanent availability of electricity from the national grid. This is a very expensive source of energy for the organisation which, like many Ugandan companies, has turned to solar power by acquiring a photovoltaic system.

The solar power plant built on the roof of the factory consists of 442 panels capable of producing 172 kWp. The facility was built by solar energy suppliers Village Energy and Bitcom Delta, subcontractors to Astonfield Solar for this project. Connected to the grid, the plant, which is already operating at full capacity, ensures that the plant’s needs are met during peak daytime hours.

“Electricity is expensive. This situation particularly affects farmers. But solar will reduce the expense of processing coffee with electricity,” says Joseph Nkandu, Nucafe’s executive director. According to him, the new solar power plant that the coffee growers’ organisation has just acquired is expected to cut the farmers’ electricity costs by 60 per cent, while those of the factory (Nucafe) will fall by 40 per cent.

For Village Energy, which built the solar power plant, it will take at least 5 years to get the electricity free of charge, the time it takes to recover the funds invested in this green energy project. Nucafe will be able to operate the plant for at least 25 years. A bargain for the national umbrella organisation which brings together 1.5 million small farmers (coffee), organised in 200 farmers’ cooperatives and associations, representing more than 250,000 families in Uganda.

Support for the sustainable agriculture project

In addition to reducing electricity costs, the 172 kWp solar power plant is expected to reduce the carbon footprint of the Namanve plant. The solar project, which promotes sustainable coffee production, has received a lot of support, notably from the Nordic Development Fund (NDF), through the Nordic Climate Facility (NCF), a fund launched in 2009 to finance early stage climate change projects in developing countries.

The National Union of Coffee Agri business and Farm Enterprise (Nucafe) also benefited from technical support from the engineering consultancy Niras International and the technical team at Makerere University in Kampala.