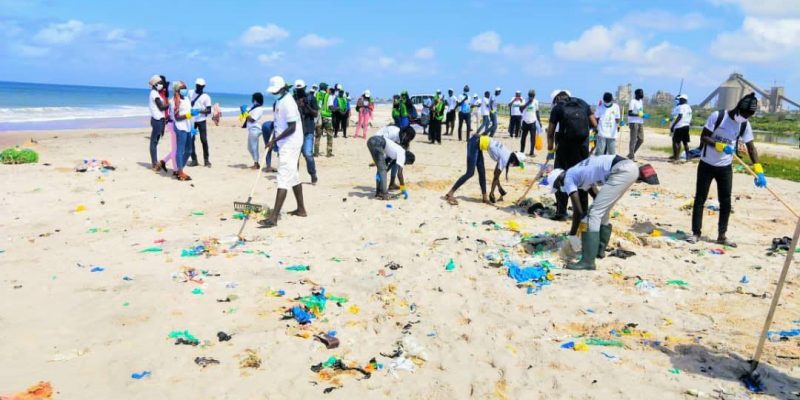 The Club for Reflection and Citizen Action (Crac) mobilises young Senegalese people on the operation "zero waste beach". This operation aims to clean up the beach of Bargny, a seaside town located in the west of Senegal.

The Club for Reflection and Citizen Action (Crac) is once again on the front line of the fight against pollution in Bargny, a seaside resort located 35 kilometres away from Dakar, in western Senegal. On August 15th, 2020, the association launched an operation called “zero waste beach”. It is a day of beach cleaning along the coastline in Bargny. Crac mobilised more than a hundred young volunteers for this purpose, who collected the plastic waste littering the beach. The initiative was supported by Eiffage Senegal, as part of its corporate social responsibility policy. “So, in addition to the equipment we provided, our agents were mobilised to take an active part in the activity,” said the construction company on its Facebook page.

Maritime traffic and beach users remain the main polluters of the Senegalese coast. They throw all kinds of waste, mostly plastic packaging, into the sea. Whereas a law banning plastic bags was passed in 2015 in Senegal.

Polluting industries are making life hard for the people of Bargny.

“Zero waste beach” is the second environmental action launched in Bargny by Crac. The association, created on May 12th, 2019, in order to be a force of proposal and contribution to the development of Senegal, had carried out from 28 to 29 December 2019 the activities of the operation “Clean Up Bargny”. A citizen action consisting in cleaning up this locality of about 70,000 inhabitants, as Bargny is perceived as one of the most polluted localities in Senegal.

Indeed, in addition to the pollution of the coastline by plastic waste, Bargny faces many other environmental problems. The area of the city is polluted by the gaseous emanations of two polluting industries. On the one hand there is toxic dust from the largest cement factory in West Africa, Sococim. Limestone is extracted from the quarry with explosives, and 250,000 tonnes of coal are used every year to fire cement. On the other side, there is a power station that burns 350,000 tonnes of coal per year and pumps 1,500 m3 of sea water per hour for the condenser cooling circuits.