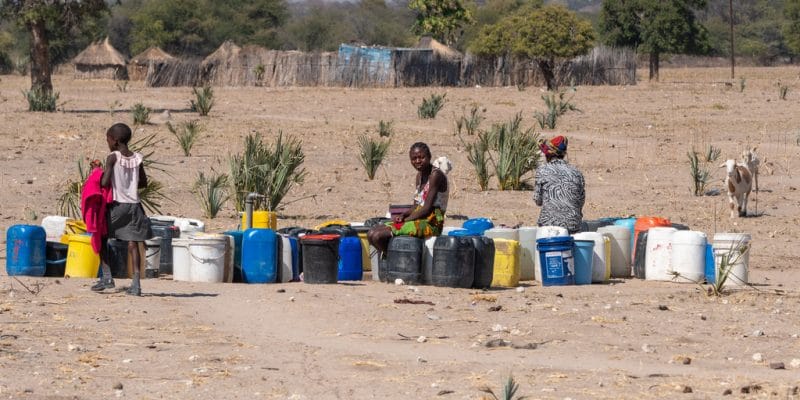 The Zambezi region, located in northeastern Namibia, has recently benefited from a government emergency plan to deal with the drought. The amount involved is N$19.7 million (US$1.33 million) for a water supply.

Waiting for the rainy season can seem like a lifetime in East and Southern Africa. This part of the continent is particularly affected by drought. In the Zambezi region of northeastern Namibia, the situation is critical for both humans and animals. The conditions are such that the Namibian government has urgently released N$19.7 million (US$1.33 million) for water supply.

“We have purchased water pipes to help communities that do not have water to connect to boreholes so that they no longer have to travel long distances in search of water,” says Lawrence Sampofu, Governor of the Zambezi region. These pipes will be connected to installations that pump water from the groundwater table to feed the network.

The region’s drinking water supply depends on rivers, including the Chobe, Linyanti and Kwando rivers, but they dried up. Some boreholes in the region have suffered the same fate. Some of these rivers also serve as living environments for crocodiles and hippos. Their drying out causes a critical situation for these animals. The Namibian Ministry of Environment and Tourism has responded urgently by installing a borehole that is now used to supply the ponds.

The ordeal of the animals in Hwange Park…

Drought is also affecting Zimbabwe. More than 300 km from the Zambezi region is Hwange National Park, which covers an area of 14,651 km2, the largest in Zimbabwe. Surface water sources have already dried up in this conservation area, which contains more than 45,000 elephants.

Even this pachyderm, known for its resistance to drought, is succumbing to the vagaries of the weather. In the last two months, 55 elephants have died of hunger, but mostly thirst in Hwange National Park. Drilling has been built on both sides of the park, but it is not sufficient to meet the water needs of the animals.

“Although we have made efforts to try to convert some of the water pumping stations from diesel to solar power, we have found that some water basins are drying out. We are asking for more resources for the installation of diesel pumps to complement the solar pumps,” says Samson Chibaya, director of the Hwange Zambezi cluster. Hwange National Park is expected to be green again with the arrival of the rainy season in November.