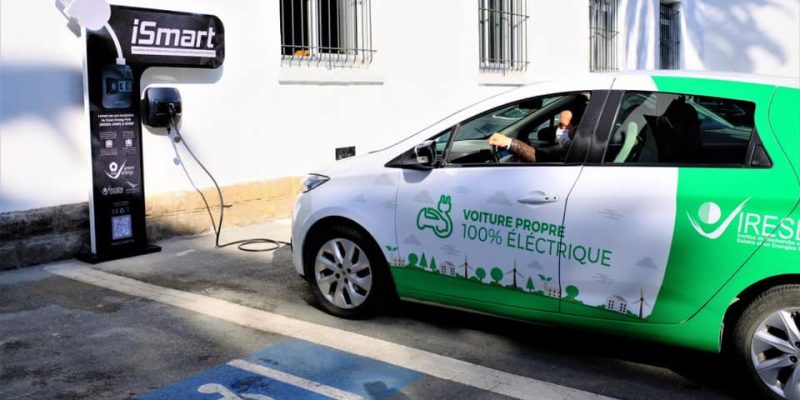 Morocco equips itself with its first charging station for electric cars. The station, 100 % manufactured in the Cherifian kingdom, will be assembled by the automobile manufacturers in the Green Energy Park, an international platform for tests, research and training located at BenGuerir, in the centre of Morocco.

In Morocco, owners of electric vehicles now have a new charging station. The government of the Cherifian kingdom has just presented the first electric recharging station in Morocco, 100% locally manufactured. The project is called “iSmart”.

The “iSmart” recharging station, in black and grey, was developed by the Moroccan technicians of the Green Energy Park. It is an international platform for testing, research and training set up by the Research Institute for Solar Energy and New Energies (IRESEN) with the support of the Moroccan Ministry of Energy, Mines, Water and the Environment and the Office Chérifien des Phosphates (OCP). The Green Energy Park, located in the town of BenGuerir, Rehamna province in Morocco, will also serve as an assembly centre for the “iSmart” charging stations. Industrial production will start at the beginning of 2021.

A much greener solution

According to Badr Ikken, the general manager of IRESEN, 5,000 recharging stations for electric cars will be assembled in Morocco by 2022, thus reducing carbon dioxide emissions in the transport sector. “Each “iSmart” recharging station will be connected to a monitoring platform that facilitates control and maintenance, integrates CO2 sensors and a static and dynamic projector in order to offer several services to users and cities. The charging station will also be able to connect to the 4G and display information and advertising. A platform has been set up to monitor and manage the charging stations in each city,” says Badr Ikken.
The “iSmart” charging station offers power ranges of 7.5 kW, 22 kW and a capacity of 50 kW allowing a small car to be charged in 30 minutes via an electric cable. For the Moroccan authorities, this is a much greener solution that supports existing electric charging stations. In July 2018, fifteen electric vehicle recharging stations were put into service in ten service stations of the French company Total in Morocco, notably on the Tangier-Agadir motorway and in the cities of Agadir, Marrakech, Casablanca, Rabat and Tangier.