Homepage » MADAGASCAR: Lemurs and habitat at risk of extinction

MADAGASCAR: Lemurs and habitat at risk of extinction 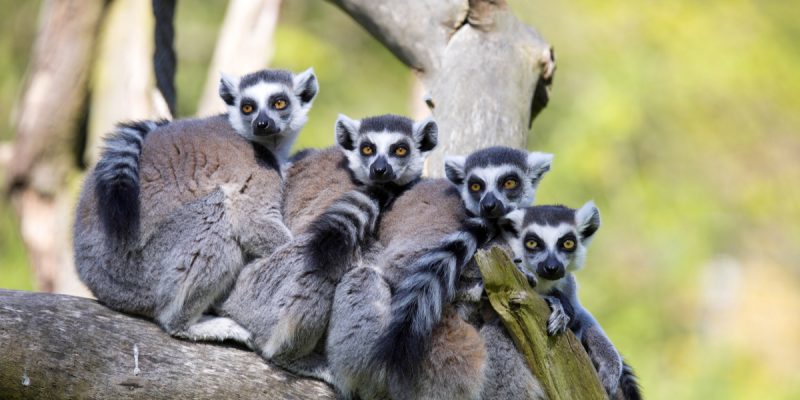 Biodiversity is in serious danger in Madagascar. The Island, considered a sanctuary of nature, is under severe attack by poachers and lumberjacks. Among other recorded damages, the annual loss of 50 to 100,000 hectares of forest cover, while 50 to 100,000 lemurs disappear each year, leaving a desolate landscape behind them. The Intergovernmental science-policy Platform on Biodiversity and Ecosystem Services (IPBES) asserts that there is still hope. All it takes is action now.

Madagascar, a Treasure Island that alone contains 5% of the world’s biodiversity, has become the scene of a permanent crime. The lemur, a species of monkey endemic to Madagascar, whose five families can only be observed in the four corners of the “big island”, is one of the preferred targets of hunters. Here the capture technique is simple, but disastrous. Poachers cut down the trees that encircle primates’ nests to deprive them of any possibility of escape then they shake the nest to make them fall. Once captured, the lemur will be eaten, or sold as a pet at a good price. However, for the Malagasy authorities, it is difficult to curb trafficking in one of the poorest countries in the world.

Between 50 and 100,000 lemurs disappear every year on the island. According to the NGO Lemur Conservation Network (LCN), 105 of the 111 lemur species listed in Madagascar are in danger of extinction. As if this is not enough, the living environment itself of these small mammals is methodically destroyed. The UN report on biodiversity, published on May 6, 2019, confirms this: 95% of lemurs are at risk of death due to deforestation in Madagascar.

Most of the felled trees are burned to make charcoal, a very cheap fuel and therefore highly prized by the inhabitants of Madagascar. Thus, each year the country loses 50 to 100,000 hectares of forest cover, out of a total estimated at 9 million hectares, by the Ministry of the Environment.

The UN prescribes immediate and radical changes to remedy the situation

Situations such as that of Madagascar make the UN fear the arrival of a 6th mass extinction, after the one experienced by dinosaurs. That is why the IPBES, which is to nature what the IPCC is to climate, adopted a reference document, prepared by 158 experts, whose conclusions will prevent the states that signed it from saying, at the next disaster, “we did not know”.

The conclusions of this report give a glimmer of hope. “We still have the means to ensure a sustainable future for human beings and the planet,” the scientists say. However, for this to happen, “fundamental systemwide change, which takes into account technological, economic and social factors, is the only way to halt the decline in biodiversity. Especially since it is connected to other major and equally pressing issues, starting with global warming.

At the local level, Madagascar has developed and adopted strategic initiatives, measures and policies to reduce, mitigate threats, protect the environment and also conserve biodiversity. Measures include the strategic plan for the management of phylogenetic resources, the plan and strategy for the conservation of certain taxonomic groups of fauna (amphibians, turtles), and the action plan on the impacts of climate change.

KENYA: Call for participation in the planting of 10,000 trees in Nairobi Park

KENYA: Call for participation in the planting of 10,000 trees in Nairobi Park