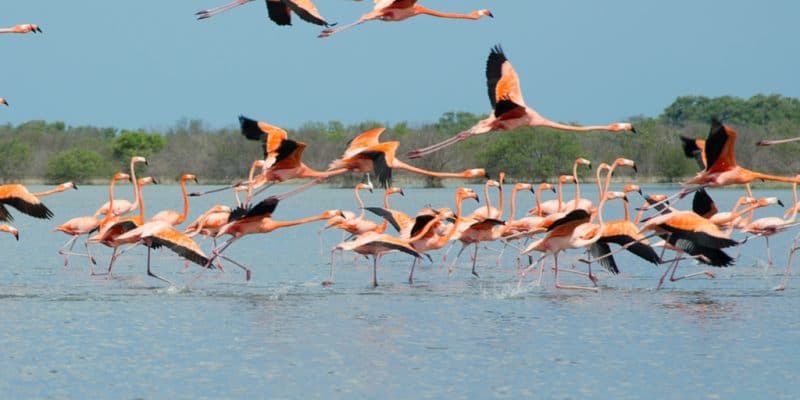 Flamingos are fleeing from Lake Nakuru in the eponymous county in Kenya. The phenomenon has intensified in recent years and the situation is attributed to man, who is also responsible for deforestation.

The image of Lake Nakuru has long served as a postcard in Kenya. The lake is located 130 kilometres north of Nairobi, the capital. More than 200,000 tourists visit the lake each year to admire the beauty of the magnificent landscape in the heart of the Rift Valley. The charm of the site was enhanced by the presence of pink flamingos. During the good seasons, up to 75% of the world’s population of these birds used to gather in Nakuru. Today, the site is almost empty. Lake Nakuru currently supports between 5,000 and 15,000 flamingos, compared to 2 to 4 million just a few years ago.  “Ten years ago, you could see millions of flamingos, it was like a big pink cloud. Today, you can’t see much,” deplores Jackson Raini, director of the flamingo protection network.

Why are flamingos deserting Lake Nakuru?

In 2013, following the floods, the level of Lake Nakuru is rising rapidly and its surface area almost doubles. It increases from 31 to 54 square kilometres. Although Lake Nakuru is not completely losing its charm, this rise in water level is causing upheaval in its ecosystem. According to the guardians of Lake Nakuru, “there is more fresh water and the salinity has dropped sharply”.  A situation that deprives flamingos of their main food, spirulina. Spirulina is an extremely protein-rich blue micro-algae that was once present in the alkaline, salty and shallow waters of Lake Nakuru.

According to the lake guardians, this is due to the destruction of the Mau forest around Lake Nakuru. Today, only 40% of the original forest remains. The phenomenon has accelerated considerably since the early 2000s to the benefit of agricultural land. As a consequence, flamingos have deserted Nakuru County and have moved into Lake Logoria, still in Kenya. According to the guardians of Lake Logoria, the site is home to more than a million flamingos, five times as many as a few years ago. Lake Logoria is more abundant in salt water, making it more resistant to flooding. However, its water level has been rising alarmingly for some time. According to the flamingo protection network in Kenya, almost 1/3 of the flamingo population has already disappeared in the last ten years.