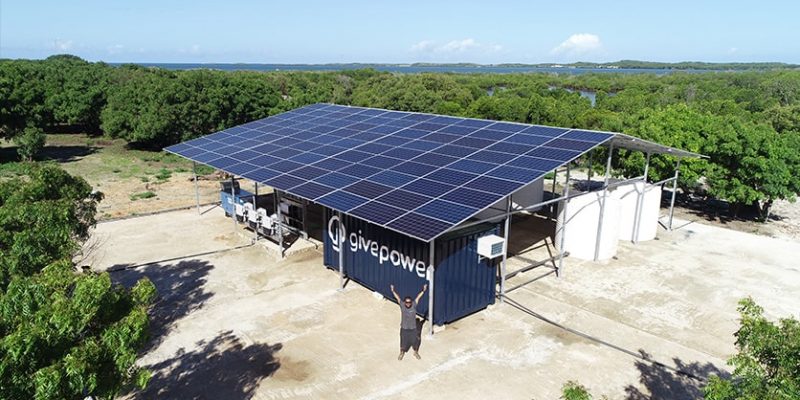 The GivePower organization has just commissioned a desalination system in Likoni in Mombassa County, Kenya. The containerised system, powered by solar energy, provides drinking water to the people of this coastal area.

A seawater desalination system is now operational at Likoni in Mombassa County in eastern Kenya. The containerised system was recently commissioned by GivePower, a clean and renewable energy organisation based in San Francisco, USA. The new installation consists of a water purification system installed in a 20-foot container capable of providing 70 m³ of water per day to the people of this coastal community.

The entire water desalination system is powered by a small photovoltaic solar power plant installed on the container, which has a battery-based electricity storage system to enable the installation to provide drinking water after sunset or in bad weather.

Water distributed via a SmartTap system

GivePower’s small desalination plant is designed to operate 24 hours a day. “Drinking water is available to people directly on site, where a SmartTap system pours the exact amount of water needed to fill a person’s containers. Each system can also provide large quantities of water for those looking to redistribute in carts or trucks,” the organization says.

The SmartTap system, which is very common in Africa, facilitates the management of decentralised drinking water supply systems. It consists of a device that works with software to measure the quantity of water for each consumer. GivePower believes its solution could help limit the spread of Covid-19 among the population; one of the barrier measures recommended by the World Health Organization (WHO) is regular hand washing.

“Water-borne diseases are the leading cause of death on the planet and 2.1 billion people lack access to a reliable water source. While traditional solutions such as wells or rainwater harvesting may work for some, they are not a solution for people living in dry coastal areas due to the brackish nature of the groundwater and the lack of sufficient rainfall,” says the organisation.

GivePower is not its first project in Kenya. In 2019, the organisation installed its desalination system to supply drinking water to people in the coastal town of Kiunga, near the Kenya-Somalia border. It is currently developing four other projects in arid localities in Kenya.