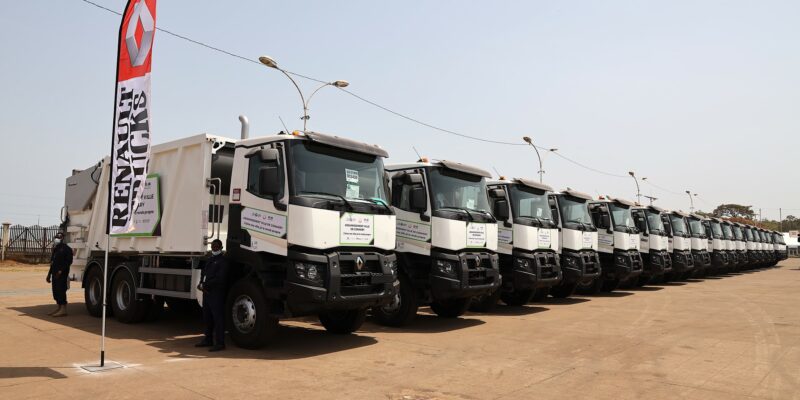 In Guinea, the government has just equipped the National Agency for Sanitation and Public Health (Anasp) with 56 trucks to improve the collection and transport of solid waste in Conakry, the capital of Guinea. The authorities received the funding from the Islamic Development Bank (IDB), through its Lives & Livelihoods Fund (LLF).

The National Agency for Sanitation and Public Health (Anasp) has new equipment for its activities in Conakry. On March 31st, 2021, the agency received 56 trucks dedicated to the collection and transport of solid waste in the capital of Guinea.

With the new vehicles, Anasp will improve its efficiency in solid waste management in Conakry. The acquisition of the fleet cost US$54 million. The funds were provided by the Islamic Development Bank (IDB) through the Lives & Livelihoods Fund (LLF), as part of the Conakry city sanitation project. Part of this financing, i.e. 49 million dollars, is dedicated to other components.

The Conakry sanitation project, which mainly concerns the councils of Matoto and Ratoma, will also enable “the supply of 20,000 200-litre waste bins, the construction of 56 km of primary, secondary and tertiary reinforced concrete canals for the drainage of rainwater and wastewater, and the rehabilitation of two sewage treatment plants”, says Mama Kanny Diallo, Guinea’s Minister for Planning and Economic Development. The Guinean authorities are also planning to expand the capacity of the sludge treatment plants at the Yimbaya and Sonfonia sites, as well as their access roads to these facilities.

Rehabilitation of the La Minière dump

In Conakry, a city with a population of nearly 1.7 million, the sanitation project will also help preserve the environment by rehabilitating the infamous Minière landfill site, located in the heart of Conakry’s Dar Es Salam district. In August 2017, heavy rains caused the collapse of this decades-old dump. The buildings below were buried by the waste, killing at least nine people.

The La Minière landfill is currently managed by Piccini with an annual budget of 50 billion Guinean francs, or almost €5 million. In 2019, the Italian company signed a four-year contract with the Egyptian Ministry of Water and Sanitation.

In the same period, Albayrak won a contract for the pre-collection and collection of waste in the council of Kaloum in Conakry. Since 2019, the Turkish company has been responsible for sweeping the main arteries of the Guinean capital. Albayrak also receives an endowment of about $5 million from the State of Guinea each year to finance its activities on Guinean soil.