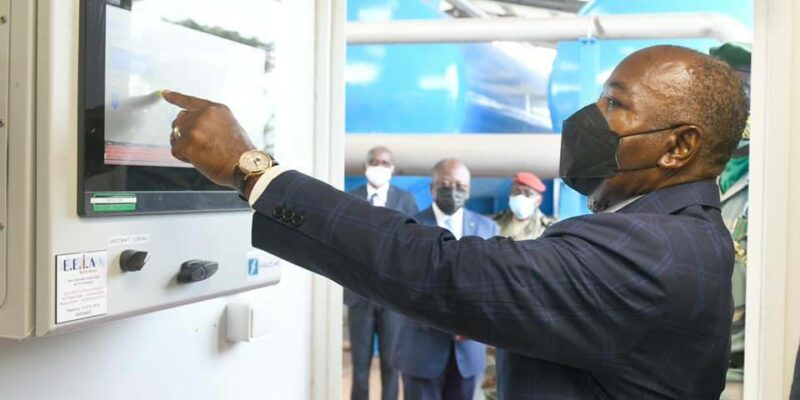 The President of the Republic of Gabon, Ali Bongo Ondimba, has just inaugurated a drinking water plant in Ntoum, a town located 38 km from the Gabonese capital Libreville. The plant supplies drinking water to 32,500 households.

The new drinking water plant, named CIM Gabon II, was commissioned on April 15th, 2021. The plant is located in Ntoum, a town near Libreville, the capital of Gabon. The plant, which has a capacity of 36,000 m3, operates with a floating intake on the N’Zeme River. The raw water passes through a 3.5 km long delivery pipe in the town of Ntoum to supply the drinking water plant.

According to the President of the Republic of Gabon, Ali Bongo Ondimba, the new installation will make it possible to reinforce the supply of drinking water to the populations of the town of Ntoum, as well as to nearby towns such as Libreville, Owendo and Akanda. In total, 32,500 households, or 190,000 people, will benefit from drinking water. The project, which is nearing completion, was carried out by the Établissement des techniciens de l’eau (ETE), a company based in Libreville, and the Gabonese company Méga Services, and the Société d’électricité, de téléphone et de l’eau du Gabon (Seteg). The contracts were awarded by the Société d’énergie et d’eaux du Gabon (Seeg).

The State of Gabon financed the construction of the Ntoum water treatment plant to the tune of 5.7 billion CFA francs, or 8.7 million euros. The 36,000 m3 of water that CIM Gabon II will produce will bring the quantity of water produced for the greater Libreville region of Gabon to 266,000 m3. 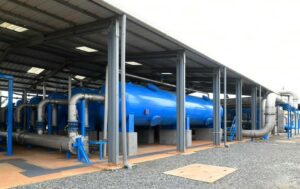 The Ntoum drinking water station will serve 32,500 households©Presidency of the Republic of Gabon

The Ntoum drinking water plant is being commissioned at a time when the Gabonese government is implementing the Libreville Integrated Water Supply and Sanitation Programme (Piaepal). On March 31st, 2021, the authorities of this Central African country officially launched the “drinking water” component of the programme. This component includes the renewal of 149 kilometres of drinking water distribution networks, as well as the extension of 131 kilometres. The completion of this work should improve the supply of drinking water to approximately 350,000 people in the greater Libreville area and surrounding localities.

Piaepal is financed by the African Development Bank (AfDB) and the Africa Growing Together Fund (AGTF) to the tune of 77 billion CFA francs (nearly 117.4 million euros). Through this programme, the Gabonese government hopes to secure access to drinking water for part of its population by 2025.