Homepage » CAPE VERDE: Record results in the conservation of sea turtles in Praia

CAPE VERDE: Record results in the conservation of sea turtles in Praia 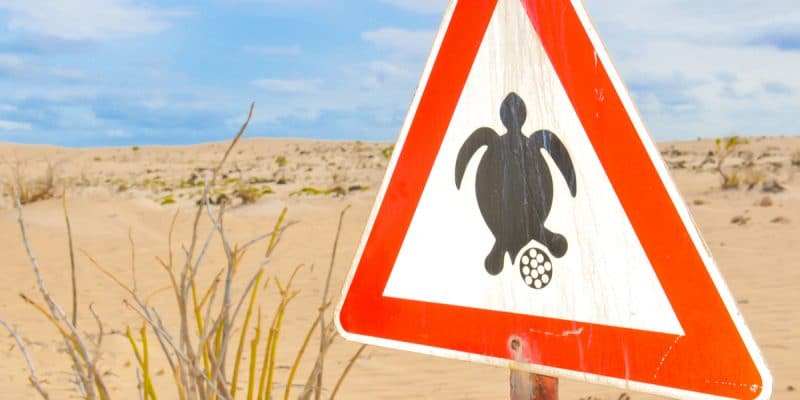 Sea turtle conservation efforts are producing encouraging results in Cape Verde. More than 140,000 nesting turtle nests have been recorded on the beach of Sao Francisco, in Praia, the capital of this archipelago, located in West Africa. Satisfied with these record-breaking nests, the government promises an increase in the financial aid allocated to Cape Verdean NGOs for the protection of marine turtles.

Good news for the NGOs that ensure the preservation of marine turtles in Cape Verde. The government intends to increase the funds allocated annually for their activities by approximately 70,000 euros. This announcement was made on September 9th, 2020, by Gilberto Silva, the Cape Verdean Minister of Agriculture and Environment. This official had just returned from a visit to the beach of Sao Francisco, in Praia, the Cape Verdean capital located in the south of the country, where a nesting area has been built for the translocation of turtle nests at risk. Result of this operation: more than 140,000 nests have been identified. A record number, which guarantees the government’s ecological and ecotourism ambitions.

“The purpose of our visit is to help raise awareness among the Cape Verdean population of the importance of preserving marine turtles. This protection has an enormous importance not only from an ecological point of view, but also in the promotion of tourism in our country” explains Gilberto Silva, Cape Verde’s Minister of Agriculture and Environment. Considered a “paradise” for sea turtles, Cape Verde welcomes more than 250,000 tourists every year, most of them from Germany, Italy and Portugal.

In order to preserve this fascination that sea turtles exert on man, Cape Verde has surrounded itself with instruments and laws on the protection of turtles and their habitat. With the help of the World Wide Fund for Nature (WWF) and the conservation organization Natura 2000, the Cape Verdean government has identified and set up 47 protected areas throughout the archipelago. In addition, the country recently signed the Convention on International Trade in Endangered Species of Fauna and Flora (Cites), and the Curral Velho marsh (Boa Vista Island, in the east of the country) will soon be on the Ramsar list of Wetlands of International Importance.

The protection of marine turtles is also of environmental interest. Several species feed on algae and thus contribute to the control of this vegetation which can become invasive; a situation whose frequency seems to increase with the warming of the oceans. Others feed on jellyfish, whose populations also tend to proliferate, probably due to the decrease in small pelagic fish that, like jellyfish, feed on plankton.