Homepage » BOTSWANA: Mystery surrounds the sudden death of 356 elephants in the north of the country

BOTSWANA: Mystery surrounds the sudden death of 356 elephants in the north of the country 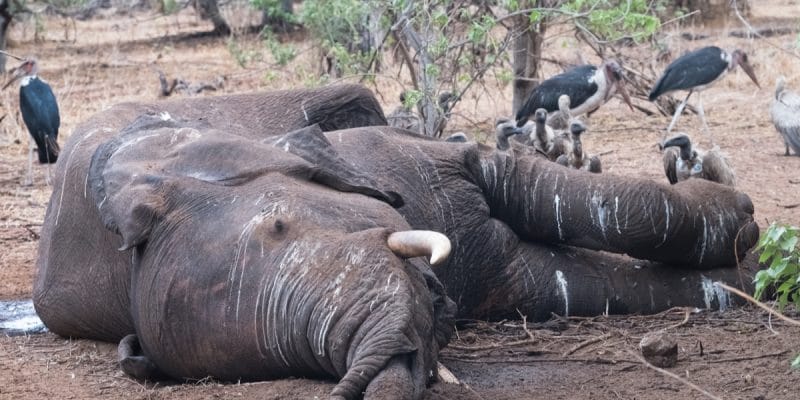 National and international opinion remains divided on the real causes of the sudden mass death of 356 elephants that occurred between May and June 2020 in the Okavango Delta, northern Botswana. The government points the finger at a colony of cyanobacteria found in puddles of rainwater in the region, while wildlife advocates point to human-induced poisoning.

The cascading deaths of 356 elephants between May and June 2020 in the Okavango Delta in northern Botswana have stopped. But three months later, the real causes of the disaster remain a mystery, even after the government’s explanation on September 21st, 2020. “More than 70 per cent of the elephants that have died in Botswana since May were found near water points polluted with large quantities of cyanobacteria. And our latest tests identified cyanobacteria neurotoxins as the cause of death,” said Cyril Taolo, deputy director of Botswana’s Department of Wildlife and National Parks.

The government’s findings have been rejected outright by many conservationists. For them it was not a disease, as many pachyderms were lying on their torso, as if they had fallen forward, and died suddenly. The thesis of a poisoning of human origin is put forward. “It was also seen that some of these elephants were not walking properly, they were running around in circles, and seemed to have difficulty using their rear limbs. To me, all this looks very much like a poison that would affect their nervous system and brain,” says Pieter Kat, director of LionAid, a wildlife conservation organisation that has done a lot of work and research on wildlife diseases in Botswana.

Poachers have been excluded from the investigations.

The Okavango Delta authorities ruled out poaching because the elephant carcasses found had retained their tusks. This reinforced the opinion of Dr. Pieter Kat, who was joined by other conservationists, including officials from Elephants Without Borders (EWB), local elephant conservation NGO. The latter’s suspicions of local people are also reinforced by the existence of conflicts between pachyderms and park residents in Botswana. The latter very often accuse the elephants of destroying their crops, and plead for a control of their numbers, estimated at 130,000 individuals, i.e. a third of the African elephant population.

Thus the debate on the real causes of the mass deaths of elephants in the Okavango Delta may only come to an end after the publication of new analytical results. According to the national park management, samples have been sent to laboratories in South Africa, Zimbabwe and Canada for further analysis.