Homepage » Africa-France 2020 Summit: How can the African sustainable city be financed?

Africa-France 2020 Summit: How can the African sustainable city be financed? 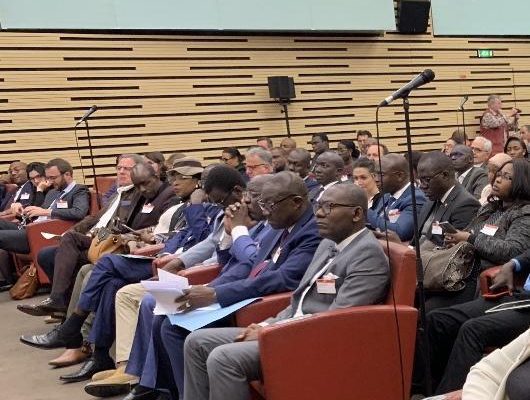 The Forum on Sustainable Cities and Towns in Africa, organised by Town planners without borders, was held on May 14 in preparation for the Africa-France Summit, which will take place under the above theme, from June 4 to 6, 2020 in Bordeaux.

Stéphanie Rivoal, Secretary General of the event, expressed her ambitions for an inclusive summit, from the citizen to the Head of State, which would also be a summit of French and above all… African solutions. She also very enthusiastically welcomed the proposal of the city minister of Ivory Coast, François Albert Amichia, to organise one or two preparatory meetings in Africa for the summit.

Out of the two round tables that followed, the first one on how to finance the major project of the African sustainable city marked the rest of the event. Questions from the audience were addressed in particular to Jean-François Habeau, Executive Director of the FMDV (Global Fund for Urban Development), who began by making an inspiring assessment.

The infrastructure needs, given the doubling of the urban population in Africa over the next 30 years, are certainly immense and amount to 90 billion euros, of which the public authorities can only assume 25%. It is therefore private investors who will have to contribute the remaining 75%. However, the good news is that there are many lines of credit at each stage of the projects, and the willingness to invest in Africa is real. Except that, the success criteria for matching supply and demand for financing are quite constraining.

Putting mayors at the centre of activities

According to Jean-François Habeau, it is thus necessary to start from the needs expressed very clearly by mayors and local authorities, while ensuring political support at the national level is essential. The two levels must jointly assume the political support of the project. Not always easy, especially when mayors are political opponents of national importance, based in some large cities….

There is all the more reason to focus on secondary cities that have a lower “euro spent/number of beneficiaries”ratio, but which play an essential role in reducing congestion in megacities and boosting the dynamism of territories. However, here too, the involvement of national decision makers is not always self-evident. During the forum (on sustainable African cities), the Senegalese mayor, Amadou Diarra, of Pikine, a suburb of Dakar, address Mr. Moustapha Ndour, Minister Counsellor of the Senegalese Ambassador to France, directly.

Supported by town planners without borders (dubbed USF in French), the local elected official carries a project for the sanitation of wastewater that floods his town’s school several times a year and a global policy for a sustainable city, for which he publicly requested the support of the minister counsellor. While waiting for the answer, at the associative level which is his, Town planners without borders (USF) signed, in the wake of the forum, a partnership agreement with the Pikine mayor’s office. On the agenda: sustainable development actions, programming and operational monitoring of the pilot project of the Dominique site, which will serve as a demonstrator at the Africa-France 2020 Summit on Sustainable Cities.

For a budgetary decentralisation

More generally, the Director General of the Global Fund for Urban Development (FMDV) advocates fiscal decentralisation and insists on the need to “strengthen investment planning, financial management capacities and solvency at the local level”.While “organising a multi-stakeholder dialogue involving central governments, the private sector, investors, donors, civil society”.Knowing that it is necessary to distinguish between appropriate technical and financial models, depending on the type of project. Whether it is purely social or generates direct income.

Financing a sustainable city programme therefore requires, at each stage, strong expertise in the preparatory phase, usually entrusted to councils outside the municipality. This requires structuring professional financial intermediaries (public and private) to trigger financial resources and channel them at the local level.

Jean-François Habeau estimates that the costs of preparing the project are generally between 10% and 25% of the total cost, in order to be able to mobilise resources as effectively as possible, among the 150 assistance schemes for the preparation of identified urban projects.

However, it is clear to all that it is often more difficult to find funding for medium-sized projects, when micro-projects and very large programmes are the subject of clearly identified funding.

This is where the International Municipal Investment Fund, a joint initiative of the United Nations Capital Development Fund (UNCDF) and the United Cities and Local Governments (UCLG) in collaboration with the FMDV, could intervene, adopted in May 2018. Objective: To facilitate access to financing for local authorities’ investment projects in national and international financial markets for sustainable urbanisation.

Under the leadership of its Secretary General, Jean Pierre Elong Mbassi, UCLG is particularly involved in decentralised financing and had also put the sustainable city at the centre of concerns at the 8th edition of the Africities Summit. At that time, a resolution, led by the women mayors and elected officials, members of the Network of Locally Elected Women of Africa (Refela), led by the then President, Célestine Ketcha-Courtès, was adopted on November 22, 2018, entitled “Green, Sustainable and Future African Cities for Women and Girls”.

Women at the centre of the sustainable city

African women are the first victims of inadequate urban services: they suffer violence in the absence of street lighting are on duty (with children) to fetch water, give birth in very risky conditions when access to electricity is not guaranteed and see all the domestic tasks as complicated. Not to mention childcare, which becomes problematic when the lack of waste management poses hygiene and public health problems. For Refela’s elected women, “it is imperative to consider women as stakeholders and actors to mitigate the effects of climate change and develop green and sustainable African cities and local communities”.

A demand that is increasingly echoed by development banks and companies that provide urban services, with women in Africa reinvesting more systematically in the benefits of access to water, electricity and transport, community care and environmental protection.

To some extent, the fact that UCLG has thus “subcontracted”the drafting of a resolution on sustainable cities to the women elected by Refela at the Africities summit also reflects the central role that women will have to play in the quest for a sustainable city in Africa. It was both anecdotal and symptomatic to note that this “division of tasks”was still present at the Forum at the National Assembly in Paris. The round table on the financing of the sustainable city gathered exclusively testimonies from men, while the round table on innovation in the circular economy and the sustainable city included two women, spokespersons for communities committed to the sustainable city in Africa: Maud Levièvre, Executive Director of Eco-Mayors, who created Les Eco-Maires Afrique in 2015, the first network of African elected officials dedicated to the environment and sustainable development, as well as Geneviève Sevrin, Executive Director of Cités unies de France (CUF), the network of French local authorities involved in international action. They both gave detailed concrete examples of achievements in favour of sustainable cities in Africa, especially in French-speaking countries…

Medef is committed to sustainable cities in Africa

On the sidelines of the Africities Summit and also in view of the Africa-France Summit on Sustainable Cities, UCLG had also signed a cooperation agreement with the “Sustainable Cities”task force of Medef International (the French business movement), led by its President Gérard Wolf. Objective: cooperation and development of sustainable urban solutions proposed to African communities, through technical and financial support from local authorities on the continent, for integrated and sustainable development for the benefit of local populations and actors.

The African sustainable city focused on, by the PFVT and Vivapolis

Since then, Medef International has invited many African decision makers and project leaders to better understand the demands and facilitate the search for solutions, still in preparation for the Africa-France Summit. With three priority messages: the excellence and complementarity of the French offer in favour of sustainable solutions, in a spirit of local cooperation defended by Medef International, and a commitment to local training.

At the same time, two other actors are also involved in the preparation of the Africa-France 2020 Summit.  While Vivapolis, the French and international network of public and private actors for sustainable cities, was present at the World Impact Summit on May 23 and 24 with a round table dedicated to sustainable cities in Africa, the French Partnership for Cities and Territories (PFVT), which brings together all the city and territory actors in favour of international cooperation, is also preparing the organisation of the French pavilion at the World Urban Forum, which is held every two years. Its president, Hubert Julien-Laferrière, a French MP, announced at the end of May that the 10th edition (World Urban Forum) would be held in Abu Dhabi from February 7 to 13, 2020 and that the PFVT would focus on initiatives in favour of sustainable cities in Africa…