Homepage » AFRICA: Famous comedian Mamane is the new climate ambassador for the Sahel

AFRICA: Famous comedian Mamane is the new climate ambassador for the Sahel 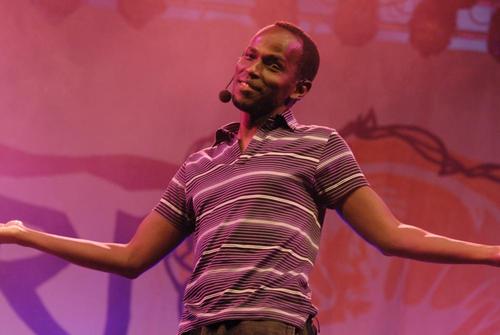 The Climate Commission for the Sahel Region (CCRS) recently appointed the Nigerian comedian Mamane as its new goodwill ambassador. The creator of the famous "Very, Very Democratic Republic of Gondwana" will have to use his image to raise awareness of environmental protection.

Millions of Mamane’s fans will be both entertained and educated about environmental protection. The signatory of the satirical column entitled “La République très très très démocratique du Gondwana” (“The Very Very Democratic Republic of Gondwana”) on Radio France Internationale (RFI) has been promoted to a new position, that of an ambassador for the climate cause.

The Nigerien comedian was appointed Goodwill Ambassador to the Climate Commission for the Sahel Region (CCRS) on November 26, 2019. His mission: to use his reputation to convey messages on environmental protection to politicians and citizens. “We humourists have a huge audience today. Our sketches make millions of views. There is not a speech to the nation that makes so many views. So let us take this opportunity to send a message that makes us useful. Because entertainment without a message is a diversion,” said the newly promoted.

Thus, in addition to making people laugh, the president of the “Parlement du rire”, a comedy show broadcast on Canal+ Afrique, will have to make African populations aware of the behaviours to adopt to fight climate change. He will talk about the dangers of cutting wood, the use of old vehicles and poor waste management (plastic bags…)

The new climate ambassador for the Sahel, a committed African

Mamane received his nomination with the feeling of being worthy of it. He relies on his experience in Africa to accomplish his mission. As the son of an ambassador, his childhood was punctuated by his father’s assignments in Ivory Coast, Cameroon and Nigeria. “I have this particularity of feeling truly African,” says the man who entered the field of humour in an unexpected way.

Arriving in France in the early 2000s for his higher education, Mamane continued his postgraduate studies in plant physiology when, by chance, he took to the stage and decided to become a comedian artist, thus abandoning the scientific career to which he seemed destined.