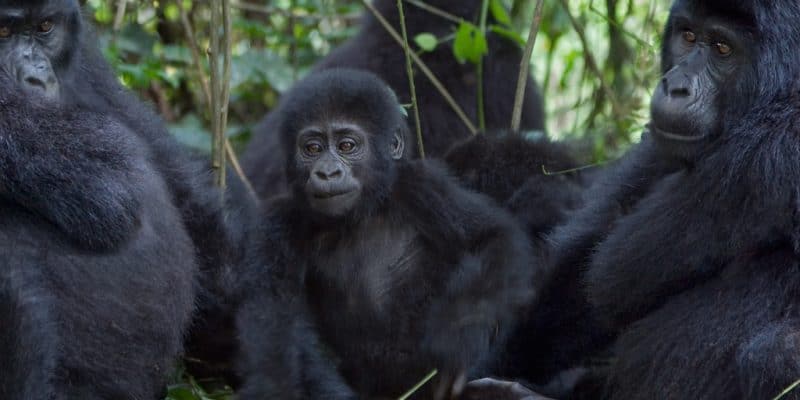 The African continent is now home to over 1000 mountain gorillas. Good news for this still endangered species. The increase in their numbers is the result of a bitter daily struggle. But this success also denies the fatalism that paralyses so many other resistances.

In eight years, the mountain gorilla population has really increased: 124 new animals have been registered, according to the latest censuses. A growth that represents a real ray of hope, especially for this species listed by the International Union for Conservation of Nature (IUCN) as “critically endangered”. The survey mobilized 12 teams to search nearly 2000 km2 of forest land in the border areas between Uganda, Rwanda and the Democratic Republic of Congo, where gorillas are distributed. The results of the survey were clear and promising: the population in Virunga National Park is 604 individuals, compared to 480 in 2010 in the last survey. Another 400 mountain gorillas reside in Bwindi National Park in Uganda. A set that produces well the number 1 004 gorillas, of which Africa can be proud. In particular, considering the fate of large mammals elsewhere in the world.

This growth has been achieved through good quality conservation programmes, including tourism regulation, veterinary mobilisation and conservation projects developed at Community level. According to the investigators, however, these joint efforts have to face another obstacle: wire or rope traps. Moreover, they found in the park of Virunga, a dead gorilla, fallen into a trap.

Mountain gorillas remain listed as endangered. Their population is vulnerable to climate change, habitat reduction, disease and insecurity. In April 2018, five rangers and a driver were killed in an ambush in the heart of Virunga National Park (DRC). In the same park, nearly 170 rangers have lost their lives in the last 2 decades. A terrible sacrifice.

BENIN: Automatic solar-powered water troughs to be built in Savalou