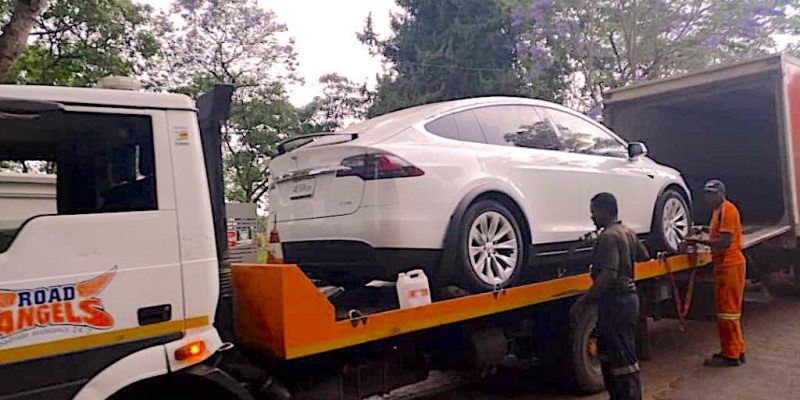 Zimbabweans saw a Tesla electric car entering Harare, the country's capital. Since then, the images of the white sedan have gone viral and are running on social networks in Zimbabwe, including Twitter and Facebook.

Under the long reign of Robert Mugabe, Zimbabwe was sanctioned by several donors, including the European Union, for poor governance and lack of respect for human rights. The sanctions have plagued the economy and the Zimbabwean dollar has very quickly lost value. Foreign currencies have become scarce, making imports very difficult. Despite the departure of Robert Mugabe and the arrival of Emmerson Mnangagwa, the economy has not recovered, as some sanctions have been maintained…

To make it easier for Zimbabweans, the government allows customs duties to be paid on forex. It is a foreign exchange market for currencies that can be converted at highly fluctuating rates. As a result, several businessmen were able to bring vehicles into the country. One of them really made a splash on the twittosphere, with a white sedan from the American brand Tesla. What arouses interest in the vehicle is that it runs 100% on electricity. In a country subject to fuel shortages, the arrival of an electric car makes sense and the passion for a luxury car, in a country where people sometimes live a difficult daily life, has done the rest.

Thanks to photos shared widely on social networks, Zimbabweans identified the vehicle; a Tesla X model that logically costs $75,000. Launched in 2015, the SUV model can travel 414 km without recharging. The car seen in Harare also has two engines. The first, 193 kW, supplies the front wheels, and the other, located at the rear, provides all-wheel drive. With such equipment, the car is capable of travelling at 250 km/h.

But who owns it?

At the moment, no one is able to say who owns the electric vehicle seen on a tow truck. The focus, however, is on Frank Buyanga, a wealthy businessman from South Africa. He had already made headlines in Zimbabwe by importing a $2 million Bugatti Veyron.

It should be noted that Elon Musk, the founder of Tesla, is from Pretoria, South Africa. He refused to have a representation of his brand on the African continent until recently, he reversed his position by announcing the opening of an office in the Western Cape in South Africa. The objective is not to market electric vehicles, but to develop Tesla’s industrial battery market. Powerwall was launched in 2015 by Elon Musk.