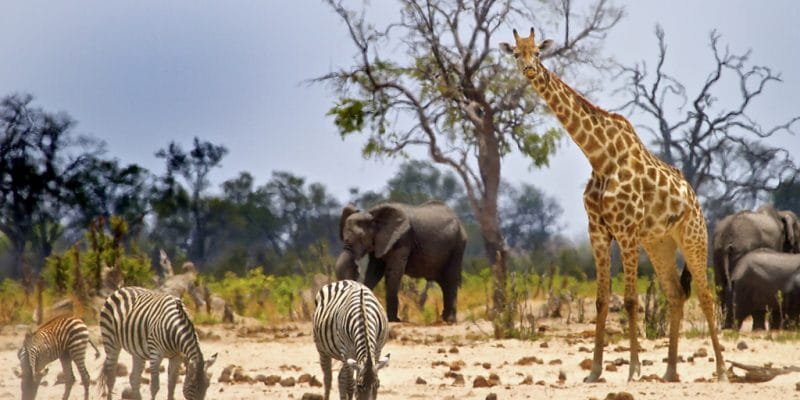 The Zimbabwean authorities have just granted a new concession for coal mining in the Hwange National Park in Northern Matabeleland Province. The fossil fuel source will be exploited by Jingan Corporation, a joint venture formed by Chinese and Zimbabwean investors. Zimbabwe's largest biodiversity hotspot is already home to several coal mines.

The Zimbabwean government’s decision has caused an outcry in the country in recent days. Jingan Corporation has just received government approval to mine coal in the heart of the Hwange National Park in the northern Matabeleland province of Zimbabwe’s western province of Matabeleland. According to the wildlife conservation organization Bhejane Trust, long before the concession agreement for coal mining in Hwange National Park, Chinese companies were already drilling for coal cores in the biodiversity reserve.

“Our rhino monitoring team recently found Chinese rhinos in Hwange Park. We were able to verify that they were taking charcoal cores. The park rangers arrested them and handed them over to the police. But they reappeared with a permit giving them the right to continue their exploratory drilling activities in the park,” explains Bhejane Trust.

Formed by Chinese and local investors, the Jingan Corporation joint venture joins other mining operators who have been granted concessions to extract coal from Hwange. These include the Hwange Coal Mine Company, Makomo Resources, Zambezi Gas, and Chilota Collieries, which extracts 30,000 tons of coal per month from the park.

The granting of a concession to Jingan Corporation in Hwange National Park has sparked outrage among Zimbabweans, especially among conservationists. For them, the decision is a blow to Zimbabwe’s largest biodiversity reserve, covering an area of 14,651 km2, almost twice the size of the capital Harare (960 km2).

“Allowing coal mining in the Hwange National Park is a serious environmental crime committed by the government and the miners. This activity threatens the biodiversity within the park,” said Simiso Mlevu, the communication officer of the Centre for Natural Resource Governance (CNRG). The noise caused by extraction activities in the coal mines will push animals away from the park and into the plantations of local residents, increasing human-wildlife conflict and poaching.

This situation could be fatal for large mammals such as rhinos, giraffes, lions and elephants, which are already heavily disturbed. Currently the Zimbabwe Parks and Wildlife Management Authority (Zimparks) is on alert after the mysterious death of 22 elephants in the park. This as yet unsolved incident comes on top of the current situation marked by the granting of a new coal mining concession in the park.

The authorities’ decision to mine coal in the Hwange National Park comes at a time when African countries are increasingly turning to clean energy sources such as solar and wind power. Despite progress in Zimbabwe, the government continues to encourage the construction of coal-fired power plants, which are extremely polluting. They are supported by Chinese companies, notably Sino Hydro, which is currently carrying out the Hwange thermal power plant extension project.

This facility has an installed capacity of 920 MW. Sino Hydro will add new units to produce an additional 600 MW. Upon completion of the expansion, the plant’s coal requirements will increase, making it necessary to tap new sources of supply. The state-owned Zimbabwe Electricity and Distribution Company (ZETDC) is counting on the plant to reduce the frequency of load shedding due to the weakness of the national power grid. In the dry season, the situation is aggravated by drought, which causes the level of the Kariba hydroelectric dam (1,319 MW) on the Zambezi River to drop.