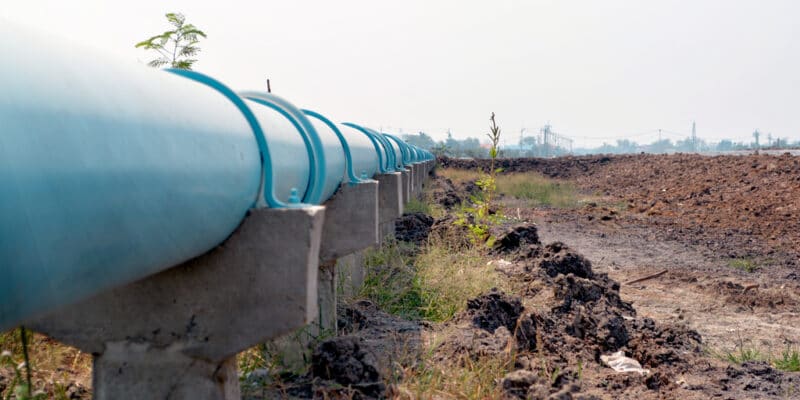 The government of Zimbabwe has just launched the construction of a pipeline to bring raw water from the Gwayi-Shangani dam to the city of Bulawayo, 260 km away. The dam is being built on the Zambezi River in the Hwange district by China International Water and Electric Corporation (CWE), a subsidiary of the giant China Three Gorges Corporation (CTE).

The project recently launched by the President of the Republic of Zimbabwe Emmerson Dambudzo Mnangagwa aims to pump raw water from the Gwayi-Shangani dam to supply Bulawayo and surrounding communities in the arid Matabeleland region. The authorities have entrusted the laying of 260 km of pipelines to local companies who will carry out the work with a budget of 535 million Zimbabwean dollars, or US$1.47 million.

The works in progress are part of the Matabeleland Zambezi Water Project (MZWP) whose overall objective is to end the permanent water shortage in this arid province. The project is being implemented in several phases. In the first phase, the authorities want to deliver the Gwayi-Shangani dam, the construction of which has been entrusted to China International Water and Electric Corporation (CWE), a subsidiary of the giant China Three Gorges Corporation (CTE).

The crucial role of the Gwayi-Shangani dam

The Chinese company was supposed to commission the reservoir in 2021. However, work has been greatly delayed due to travel restrictions imposed by the authorities at the height of the Covid-19 health crisis. CWE is constructing a roller-compacted concrete gravity dam 70 m high and 305 m wide. The facility, located approximately 6 km downstream of the confluence of the Gwayi and Shangani Rivers (tributary of the Zambezi River), will be capable of storing 634 million m3 of water. With the lifting of sanitary restrictions, CWE plans to commission the reservoir in 2022.

The second phase of the project involves the construction of an intake in the new dam. The raw water will follow the new pipes, the laying of which was recently launched by the Zimbabwean authorities. The pipelines will bring water to Bulawayo. The government plans to treat this water for households and send some of the raw water to feed irrigation systems in the arid Matabeleland region.

It will be necessary to wait until 2022 to benefit from the new facilities. In the meantime, the Zimbabwean government has found an interim solution to address the water problems in the city of Bulawayo. Following the start of work to lay water pipes from the Gwayi-Shangani dam to Bulawayo, President Emmerson Dambudzo Mnangagwa has commissioned boreholes in the Epping Forest.

These pumping stations draw water from the Nyamandlovu aquifer. In September 2020, Zimbabwe’s treasury released Z$205 million (US$566,000) for the rehabilitation of 20 boreholes at Nyamandlovu. These facilities now provide 10,000 m3 of water per day to the people of Bulawayo.