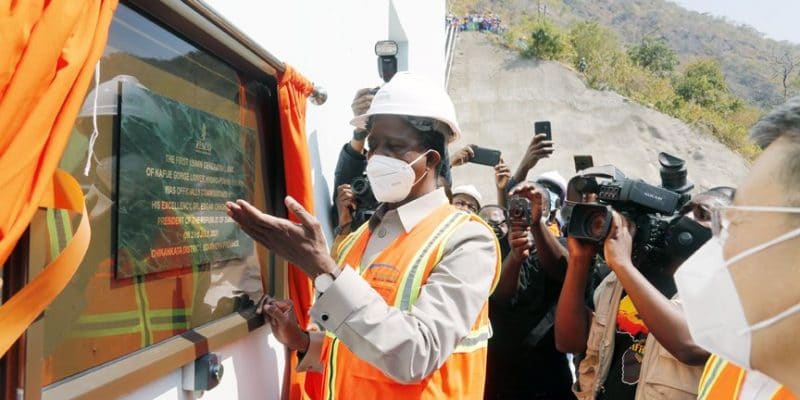 The Chinese company Sinohydro is commissioning the first unit (150 MW) of the Kafue hydroelectric power station. The hydroelectric scheme on the Kafue River will eventually add 750 MW of power to Zambia's national grid.

The President of the Republic of Zambia Edgar Chagwa Lungu recently visited the Chinkankata district for the commissioning of the first unit of the Kafue Hydroelectric Power Plant. The Kafue hydropower project is being implemented by Sinohydro, about 50 kilometres south of Lusaka. The Chinese company has built an earth and rockfill dam with a concrete spillway with four radial gates on the Kafue River, a tributary of the Zambezi River.

Fellow Citizens, Join me as I commission Turbine number 2 at the 750 megawatts Kafue Gorge Lower Hydro Power Station here in Chikankata district, Southern Province. This brings an additional 150 megawatts of electricity to the national grid. The dark days https://t.co/aHZxVmGXFS

The dam is 139 m high, with a crest width of between 8 and 10 m and a length of 378 m. The dam forms a reservoir covering 80 940 hectares. When completed, the power station will consist of five units of 150 MW each, the first of which already supplies the grid of the state-owned Zambia Electricity Supply Corporation (ZESCO).

“The commissioning of this power plant today is a demonstration of our determination to fight cynicism to give this country a solid foundation of energy security,” said President Edgar Lungu at the commissioning ceremony of the first unit of the Kafue hydroelectric plant. Sinohydro started construction of the new facility in November 2015, with commissioning planned from 2020.

Read also-ZAMBIA/ZIMBABWE: GE and Power China to start construction of Batoka Gorge in 2020

However, the global health crisis caused by Covid-19 has delayed work on the project site. The Kafue hydropower plant will have a capacity of 750 MW, thanks to a US$2 billion investment financed by Sinohydro. According to the Zambian government, the new facility will “meet the growing demand for electricity in the country and surrounding areas and mitigate the electricity deficit, thereby supporting continued economic progress”. Officially, Zambia has been self-sufficient in electricity since 2018, with an installed capacity of 2,800MW, of which 2,380MW is generated from hydropower plants.

The East African country’s installed capacity will also increase with the commissioning of the Batoka Gorge hydropower plant it is building with Zimbabwe on the Zambezi River, with a capacity of 2 400 MW. The electricity will be fed into the national power grids of Zimbabwe and Zambia. However, faced with the resurgence of droughts that reduce river flows, the challenge for Lusaka at present is to diversify its electricity mix to minimise the impact of this phenomenon on its energy security.