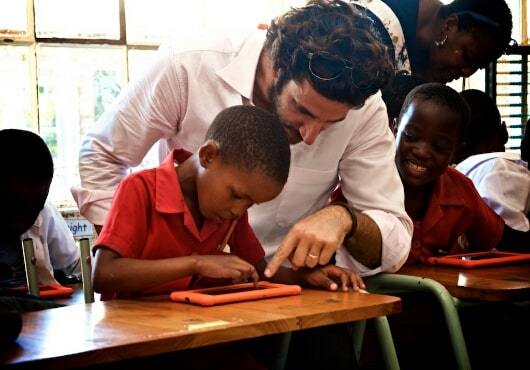 Baoba+ offers educational tablets with solar kits in rural West Africa. The approach, which aims to reduce illiteracy in areas not connected to the electricity grid, will enable the young startup to sell 150,000 solar kits by the end of 2018.

The Baoba+ startup has just set up a direct bridge between access to energy and access to education in rural areas. After providing lighting to 50,000 rural households in Africa in 2017, Baoba+ wants to go further, allowing 150,000 other rural households not only to light up in the evening, but also to provide their children with a better education. In rural Africa, schoolchildren and young people often do not have access to textbooks and school kits, which shall enable them to have the same open-mindedness as their brothers in urban areas.

“I wanted to start a business in sectors with a social impact. Education is a first aspect that I wanted to develop,” says Alexandre Coster, founder and director of Baobab+, in a post recently published on his website. His new battle-horse: educational tablets. The digital products, equipped with educational software, are sold at a reduced price, thanks to the lower cost of equipment, and powered by electricity from solar kits. In addition to Madagascar, where the startup was established in June 2016, the new Baobab+ project will initially focus on West Africa, particularly Senegal, Mali and Côte d’Ivoire.

The distribution of solar kits and educational tablets through Baobab network agencies is done via a “pay-as-you-go” offer (pay-per-use). It consists in becoming the owner of a property when you finish paying it in full. In other words, by using solar kits, households have the possibility to pay 30 to 50 cents a day, with a mobile payment, until the equipment finally becomes their property. The kits range from 130 to 450 euros (99,000 to 296,000 CFA francs).

“Every time the customer pays, the system unlocks and provides energy for the number of days paid. In the medium term, this allows one to become the owner of one’s solar kit once the total amount has been reached. Only then does the customer become eligible for a loan from Microcred to buy his/her tablet, which can then be recharged using his/her solar kit,” explains Alexandre Coster.

Founded in 2015 in Senegal, the young startup Baobab+ is a subsidiary of the Baobab Group, one of the leaders in digital financial inclusion. Baobab offers its services mainly to individuals, micro and small businesses in Africa and China. Its self-proclaimed mission is to unleash its clients’ potential by offering them simple and easy-to-use financial services.