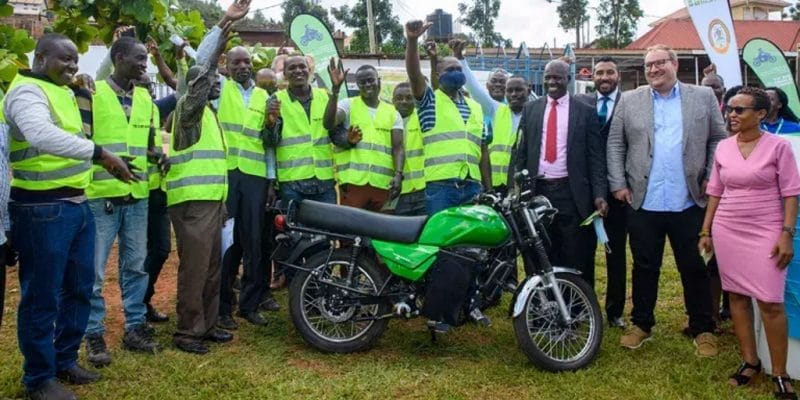 In Uganda, electric mobility start-up Zembo is installing four solar and hybrid charging stations along the Kamapala-Masaka axis. The installations will allow electric motorbike drivers to increase their daily income and contribute to improving air quality in the East African country.

With 700,000 ‘boda boda’ on the roads of Kampala, motorbike taxis provide 5% of employment in Uganda. Kembo wants to transform this sector by making it more ecological. The mobility start-up has just opened four new battery exchange stations for its electric motorbikes.

At least three of the stations are solar powered. Another charges the batteries of electric motorbikes with electricity generated from hybrid solar energy. These exchange points are installed along the Kamapala-Masaka axis (120 km). The start-up’s new facilities have received financial support from Deutsche Gesellschaft für Internationale Zusammenarbeit (GIZ), the German international development cooperation agency, and Powering Renewable Energy Opportunities (PREO), a renewable energy funding programme supported by the Ikea Foundation and UK Aid. Preo is implemented by the Carbon Trust and Energy 4 Impact.

The impact of solar charging

Zembo also plans to equip each of these spare stations with six new electric motorbikes. This will also create 20 jobs for technicians. With 250 electric motorbikes carrying 800 passengers daily, the young start-up founded in 2019 by Étienne Saint-Sernin and Daniel Dreher performs 10,000 battery replacements per month thanks to its 27 charging stations already operational. A service that allows each driver to save up to 3 euros on petrol and avoid emissions of at least 276 kg of CO2.

“Zembo’s strategy is to position itself as one of the leading battery exchange operators in the country through the creation of a national network of charging stations, including in off-grid areas where it is difficult for drivers to find affordable fuel and even harder to find electricity. Solar has the advantage of being available everywhere in Uganda, which means that spare stations can be set up everywhere,” says Titus Kimbowa, the operations manager of Zembo’s commercial team.

In November 2021, Zembo received $3.4 million (just over 12.82 billion Ugandan shillings) from investors InfraCo Africa, DOB Equity and Mobility 54. The funding is aimed at strengthening the start-up’s activities through the introduction of 2,000 electric motorbikes, the construction of some 60 battery exchange stations in Uganda, as well as its expansion into several other countries in Africa.

BENIN/TOGO: IFC lends $10m to Gozem for the deployment of 6,000 electric motorbikes