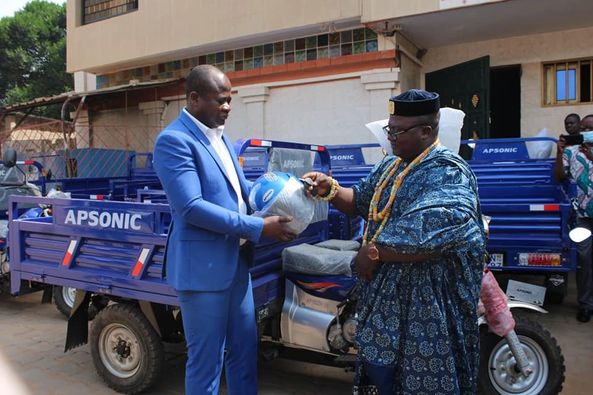 With the support of the West African Development Bank (BOAD), the organisation Science and Technology for Sustainable Development in Africa (STADD) is equipping the Togolese communes of Golfe 7, Golfe 5 and Agoè Nyivé 3 with six tricycles to facilitate waste collection in the city of Lomé. The initiative will help reduce pollution in Togo's capital, which generates 350,000 tonnes of household waste annually.

In Togo, the councils of Golfe 7, Golfe 5 and Agoè Nyivé 3 located in the city of Lomé are benefiting from six tricycles granted by the Lomé-based organisation Science and Technology for Sustainable Development (Stadd). The machines, financed by the West African Development Bank (BOAD), will facilitate the waste collection service in the Togolese capital of 1.8 million people.

“If we consider that we have a ratio of waste production per day per capita 0.65 kg, you understand that today we must be in the 468,000 tons of waste while for the collection of a ton of waste at the level of transit centres to the technical landfill, costs 12,000 francs (18 euros) that the state pays. This represents up to 7 billion CFA francs, more than the 10.6 million euros needed, while the municipality’s budget for sanitation is around 3 billion CFA francs (4.5 million euros),” explains Gado Bemah, the promoter of the non-governmental organisation (NGO) Stadd, created in 2011.

For his part, the Head of the Division for the Preservation of the Environment and Living Environment at the Togolese Ministry of the Environment suggested that the strengthening of the waste management system in urban areas depends on the involvement of the private sector, especially the large industrial companies that are the source of pollution. “Waste management is a collective and cross-cutting challenge involving several actors, because the issue of sanitation, due to several constraints, remains a major concern today,” explained Soulemane Abdel Ganiou.

A year ago, BOAD granted 47 million CFA francs (78,000 euros) to the NGO Stadd to contribute to “the promotion of behavioural changes on salubrity, hygiene and environmental preservation” in Lomé within the framework of the 2021-2025 Strategic Plan (Djoliba Plan) of the sub-regional financial institution. This initiative aims to strengthen waste collection and sorting systems (solid, liquid, biomedical, etc.) as well as recycling, job creation and access to food resources in several West African countries.