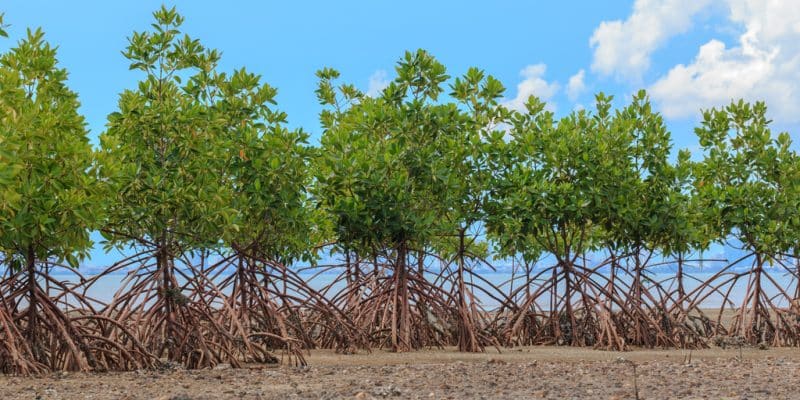 In Togo, the southern town of Aneho is in the midst of restoring its degraded land thanks to a reforestation operation recently carried out by Sogea-Satom, the subsidiary of the French public works group Vinci. This eco-responsible initiative is in line with the reforestation policy launched by the Togolese authorities.

According to the UNDP, Togo loses approximately 23,490 hectares of land per year due to demographic pressure, vegetation fires and the use of pesticides by farmers. In response to the degradation of biodiversity, the Togolese subsidiary of the French public works company Sogea-Satom has just planted 2,000 mangroves in the town of Aneho, 46 km from the capital Lomé.

The mangrove is a species of tree found in mangroves where they keep part of their trunk under the salt water of the coast and rivers. This reforestation initiative, which is part of its CSR (Corporate Social Responsibility) approach, has mobilised the local authorities in partnership with the non-governmental organisation (NGO) Vert Plus, which will be responsible for the maintenance of the plants.

“The mangrove species were chosen for specific reasons. Firstly, they have a high CO₂ sequestration rate, secondly, they fight against coastal erosion, and thirdly, they serve as bioremediation and ecological niches,” says Sogea-Satom.

The subsidiary of the French group Vinci employs more than 15,000 people in 20 countries, notably in Madagascar, where in April 2022 it carried out a similar reforestation operation in the locality of Antolojanahary, not far from the capital Antananarivo. The initiative made it possible to plant 3,000 fruit trees (mango, avocado, orange), aromatic trees (ravintsara used for the extraction of essential oils, editor’s note) and other reforestation trees, notably pine and acacia.