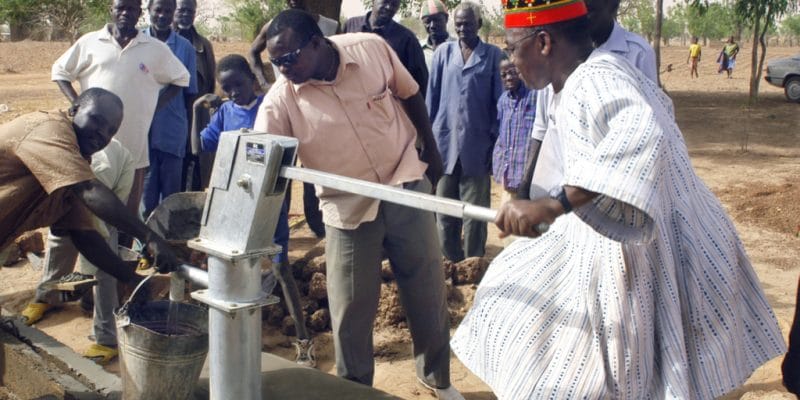 The Togolese government has officially opened three mini drinking water supply systems and latrines in several localities in the south of the country. The project is partially financed by a loan from the Islamic Development Bank (IDB).

The populations of three localities in southern Togo now have three drinking water and sanitation infrastructures at their disposal. These are mini drinking water pipes (WSPs). They were recently inaugurated by Kanfitine Tchede Issa, the Minister Delegate to the Minister of Water, Rural Equipment and Village Hydraulics, in the Dikamé (Agoè-Nyivé prefecture), Abobo-Kpoguédé (Zio department) and Amoussoukopé (Agou department) localities. The ceremony took place in the presence of the traditional leaders of the different villages.

Each mini drinking water supply line consists of a large flow well, a generator to supply the water pumping system from the groundwater table, a water tower, a room for the management of the water supply system. There is also a distribution network and good fountains that are used to supply water to the population. The infrastructure built in these three communities will “serve more than 250,000 people in rural areas and 30,000 in semi-urban areas. In addition, the latrines built mainly in schools will effectively contribute to the sanitation of the living environment in these communities. In addition to the beneficial effect on people’s health and living conditions, access to drinking water improved in this way will also help women and children reduce the need to fetch water,” says Kanfitine Tchede Issa.

The drinking water and sanitation infrastructures that are being put into operation are part of the village water project in the Maritime and BID3 Plateaux regions. It is supported by the Islamic Development Bank (IDB). “The choice of the Plateaux and Maritime regions is not a coincidence. Beyond the economic potential, it is especially in these two regions of the country that water supply rates are the lowest (38.89% for the Plateaux region and 29.04% for the Maritime region). In addition, the IDB has never intervened in these areas regarding the provision of drinking water,” the Saudi bank says.

In all, the project will install 420 new boreholes and rehabilitate 100 existing boreholes, as well as build eight mini drinking water supply networks. In terms of sanitation, 60 community latrines will be built in the Agbadomé, Abobo-Kpoguédé, Dikamé, Maritime Region and Kamina, Akparé, Amakpapé, Glitto and Amoussoukopé in the Plateaux region. The entire project will require a 7 billion CFA francs investment, or 10.6 million euros. Financing is provided by the Togolese government (10%) and the IDB (90%).

NIGERIA: USADF and All On award nine green energy suppliers