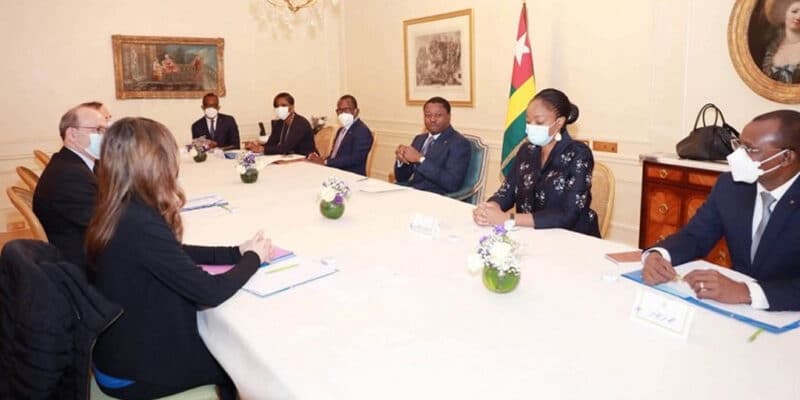 As part of his recent state visit to France, Togolese President Faure Gnassingbé signed two agreements with French investors in the energy sector. The French Development Agency (AFD) will finance the electrification of 53 localities and Sunna Design will improve public lighting via solar street lamps.

The President of the Republic of Togo, Faure Gnassingbé, has been on a state visit to France since Friday April 9th, 2021. On the menu of this trip, meetings with French officials, but especially with actors of the business world. Thus, President Gnassingbé signed two agreements in the energy sector for a total amount of 75.2 billion CFA francs, or 115 million euros.

The first agreement signed with the French Development Agency (AFD) concerns a loan of 49 billion CFA francs (75 million) for the implementation of the Programme for the Extension of the Electricity Network in Togo’s Urban Centres (Perecut). The programme aims to electrify 53 localities in this West African country. Under Perecut, the Togolese government plans to rehabilitate and extend the national electricity grid in five regions through the installation of 48 km of medium voltage network.

The programme also includes the installation of 226 new electricity transformers. The Togolese Ministry of Energy estimates that Perecut will require an investment of 46 billion CFA francs, or more than 70 million euros. The programme will allow the electrification of 108 000 households, i.e. about 540 000 people living in urban areas. In addition to AFD, Perecut is also supported by the European Union (EU) and Kreditanstalt für Wiederaufbau (KfW), the German development agency.

In Paris, the Togolese government has committed to a public-private partnership (PPP) with Sunna Design. The company based in Blanquefort (France) plans to install 50,000 solar street lamps in several Togolese councils, at a cost of 26.2 million CFA francs (40 million euros), all financed by Paris.