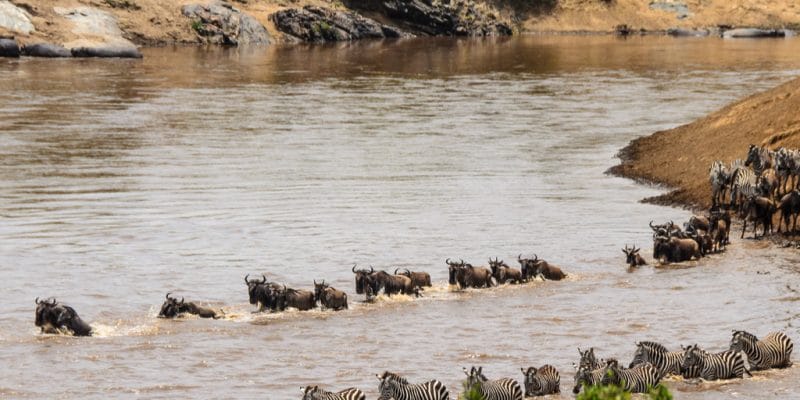 The Government of Tanzania has recently opened talks with Kenya regarding two dams that Nairobi is considering building on the Mara River. Projects that raise a lot of criticism from ecologists.

The Mara River is the main watercourse that irrigates the Tanzanian-Kenyan border ecosystem. Almost 400 km long, the turbulent river zigzags between Tanzania’s Serengeti National Park, the prestigious Masai Mara Reserve on the Kenyan side, and several other hunting reserves. The Mara River is home to one of the largest crocodile populations on the African continent. The survival of these saurians depends on the annual migration of more than 2 million wildebeests, zebras and other savannah antelopes. They travel between Serengeti National Park and Masai Mara Reserve seasonally, swimming across the Mara River.

The balance of this ecosystem is challenged by two dam projects that Kenya is planning to build on the Mara River: Norera (10 metres high) and Mungango (crest height, 30 metres). However, Tanzania is protesting against the construction of these infrastructures, which could alter the structure of the Mara River and, in turn, influence the lives of the wild animals that depend on it.

The Tanzanian government recently announced that discussions with Kenya are underway for a “complete halt to dam projects on the Mara River and its tributaries”. “The dams will have a negative impact on the Serengeti ecosystem, including the loss of some species due to lack of water in the Mara River during the dry season,” explains Tanzanian Deputy Minister of Natural Resources and Tourism Constantine Kanyasu. During the government question session this week in the Tanzanian Parliament, Constantine Kanyasu said that negotiations to stop the implementation of dam projects on the Mara River were coordinated by the Lake Victoria Basin Commission (LVBC), which is part of the Tanzanian Ministry of Foreign Affairs and East African Cooperation.

These negotiations are opening as Omikron Consulting has already published the results of its feasibility studies for the construction of water reservoirs. It would be a multi-purpose dam as it would provide water for irrigation, drinking water for household consumption and electricity generation. “The project is financially feasible, socially highly recommended. The strong element of the project is its impact on the agricultural economy. The gains there are very significant,” says Omikron Consulting in its report.

There is still hope!

Negotiations promise to be difficult, especially since Tanzania also plans to build the Borenga dam on the Mara River. It will also be a multipurpose dam. Observers have expressed hope, however, especially since Tanzania has repeatedly succeeded in obtaining agreements on transboundary water management in the past. In March 2019, the country signed an agreement with Malawi, creating a commission for water management in the Songwe River Basin. The two countries will jointly exploit the resources of this river.

For the Mara River, though, the stakes are higher because it is the future of the Serengeti National Park, which attracts thousands of tourists every year. As a reminder: in 2017, ecotourism accounted for 17.5% of Tanzania’s gross domestic product (GDP)….