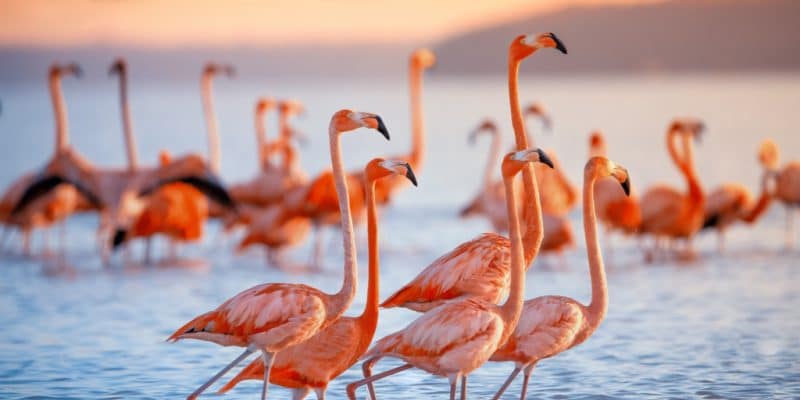 The South African Foundation for the Conservation of Coastal Birds (Sancobb) has recently accomplished a feat by saving up to 2,000 baby flamingos at the Kamfers Dam in the North Cape of South Africa. They had been abandoned by their parents, fleeing the drought.

Many observers had thought that South Africa might have been out of the woods after the end of the drought that hit the country in mid-2018, but the phenomenon seems to be recurrent. This time, it is not about people queuing up in the streets to collect drinking water, but about animals that can no longer tolerate the effects of the climatic phenomenon. Such is the case with the pink flamingos, many of which populate the waters of the Kamfers dam in the Northern Cape.

The latter were forced to abandon their chicks, driven away by an unprecedented drought, which drastically reduced the amount of water in this dam. Alerted, teams from the South African Coastal Bird Conservation Foundation (Sanccob) and several other organisations went to the scene to save the baby flamingos. “These chicks arrived in a very bad state, because many of them were dehydrated, they were tiny – some had just come out of their eggs – so we had a little infection problem. Now they are all stabilised, they receive medical treatment, they eat regularly,” explains Katta Ludynia, head of research at Sanccob.

The pink flamingo chicks are currently fed egg yolk and a special preparation made from fish and shrimp. A few days ago, Sanccob launched a call for donations to save these chicks. According to the foundation, they must be fed this way for a period of three or four months, the time it takes for them to be able to manage in the natural world. The question now arises, however, as to where they could be released. The answer is not obvious at the moment, since the waters of the Kamfers dam no longer provide the food necessary for their survival.

This is not the first time that this reservoir has experienced a drastic drop in its waters. In the past, this dam dried up constantly during the dry season and water rose during the rainy season. Since 2008, however, treated water in the nearby town of Kimberley has been discharged into the lake. As a result, in a very short period of time, the water reservoir has become a favourite feeding area for flamingos. An artificial island has been created in the middle of the basin to serve as breeding grounds for these birds that move in colonies. Except that, for the first time in ten years, and despite the contribution of urban water, drought has returned this year…