Homepage » SOUTH AFRICA: IFAT Africa, the leading trade fair for an emerging waste market
This article is part of the dossier
IFAT Africa 2019: the environmental event in Southern Africa 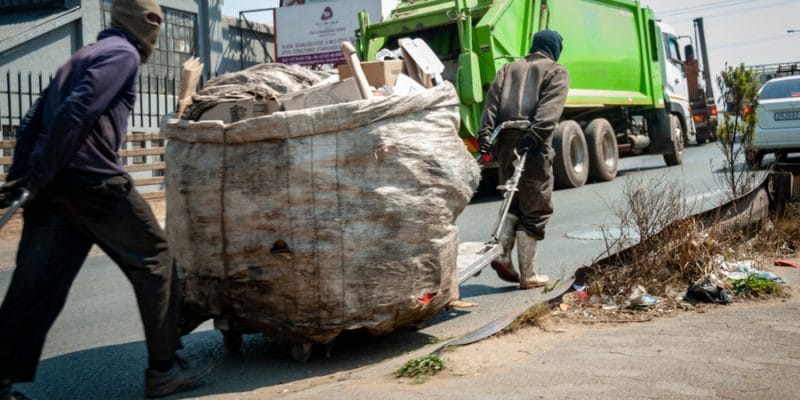 Africa's demographic and urban explosion signals the development of an emerging market for waste and recycling. In this context, the Institute of Waste Management of Southern Africa (IWMSA), which brings together South African waste professionals, has signed a memorandum of understanding with the organisers of IFAT Africa, the major environmental technology exhibition, which will be held in July 2019 in Johannesburg. The association will be present with a stand and will collaborate in the conference programme of this year's edition.

The population of Africa will have doubled in the next 30 years. From more than 1.2 billion in 2020 to 2.5 billion people in 2050. At the same time, the urbanisation of the continent is on the move, which has led to the emergence of huge megacities, of which Lagos (with its 21 million inhabitants) is the most emblematic. In a report published in September 2018, the World Bank predicts that, at the same time, the volume of waste in sub-Saharan Africa will triple, again by 2050. This extraordinary densification of inhabited areas and the devastation caused by untreated waste in cities has recently made waste treatment and disposal a priority issue in Africa.

According to a recent report by the United Nations Environment Programme (UNEP), on average, only 55 per cent of municipal waste is currently collected in Africa. More than 90% of the waste produced on the continent is reported to be dumped uncontrolled or burned on slag heaps. In addition, 19 of the world’s 50 largest waste landfills are located in sub-Saharan Africa…

In sub-Saharan Africa, there have been some good informal recycling initiatives in various places. However, it is rare for the local companies to develop multi-track capabilities. The Africa Global Recycling group, which started from Togo and now extends to Benin and Ivory Coast, remains a welcome but still quite isolated counter-example. Indeed, according to Linda Godfrey, Director of the Waste Research and Development Unit in Pretoria, and lead author of the UNEP report: “Only 4% of waste is actually recycled in Africa”. Yet, this expert on the waste market in Africa asserts that “the recycling and recovery of the materials it generates could represent a value creation of at least eight billion dollars for African economies”.

In a context of sustained economic growth in sub-Saharan Africa, the World Bank notes that investment in the waste sector is also growing. Currently, efforts are focused on the construction of modern landfill sites, the extension of municipal collection and citizen education on environmental issues.

In March last year, for example, Namibia’s first alternative fuel plant was commissioned. The Windhoek plant, which will cost nearly US$16 million, will transform 12,000 tonnes of non-recyclable waste per year into alternative fuel for a cement plant.

Considering the specific needs of the continent

Costs remain a central challenge for the future improvement of waste management in the sub-Saharan region. According to UNEP, governments are seeking innovative financing solutions, including through public-private partnerships, as they also do for major renewable energy and water projects.

Linda Godfrey cautions: “The systems and technologies needed must take into account the particular needs of the continent. Meeting the waste challenge in Africa requires a combination of relatively simple, low-cost, decentralised and community-based initiatives as well as large-scale and more expensive centralised initiatives.”

It is in this favourable context that the Institute of Waste Management of Southern Africa (IWMSA) joined ISWA (International Solid Waste Association) in January 2019, and decided to partner with IFAT Africa, taking advantage of the co-hosting of the FDT Africa Exhibition, which brings the food and drink industry together. IFAT Africa, sub-Saharan Africa’s leading trade fair on water, sanitation, waste and recycling, will be held from July 9 to 11, 2019 in Johannesburg, South Africa.

As part of IWMSA’s participation in IFAT Africa 2019, ISWA is planning an inaugural launch event in collaboration with its new local representative.

Brewers and soda manufacturers are investing

The IWMSA will also offer waste master classes at IFAT Africa, which will cover the key issues of waste management today. “We have integrated leading academic institutions to collaborate with us in these master classes on topical issues such as open landfills, waste energy recovery and the need to develop public-private partnerships to overcome the waste crisis,” says Grobbelaar.

For him, the co-location of IFAT Africa with FDT Africa and Analytica Lab Africa is an important step in bringing the entire value chain together to share knowledge and find solutions to the growing waste problem.

African decision makers in the sector, as well as multinationals such as Coca-Cola, are currently seeking solutions for water and waste management. It’s a good thing, they will only have to go a few metres to discover the offer of IFAT Africa’s exhibitors. Especially since regulations, particularly on plastics, a terrible scourge on the continent, are becoming more stringent everywhere.

However, Leon Grobbelaar points out: “Although South Africa has excellent waste legislation, there are no real enforcement mechanisms in place. The major cities are short of land to install landfills, and we have not made any progress on energy recovery. Finding solutions to these challenges means that all industry stakeholders will need to sit down with the authorities to discuss concrete implementation plans and consider ways to encourage investment in new waste management projects. IFAT Africa is a great opportunity for stakeholders to come together.”

In addition, Mr Grobbelaar stressed that IFAT Africa’s pan-African orientation will provide an opportunity for exchanges between professionals from the continent. “Some African countries are well ahead of South Africa in terms of waste management projects. Ghana, for example, has made impressive progress over the past decade, mainly through public-private partnerships,” he says.

Zoomlion, the company that manages waste in several cities in Ghana, has just commissioned a recycling plant in Accra City. With a daily capacity of 200 tonnes, this plant transforms waste into fertilisers and raw materials for industry. A total of 16 plants similar to the one in Accra will be built in Ghana.