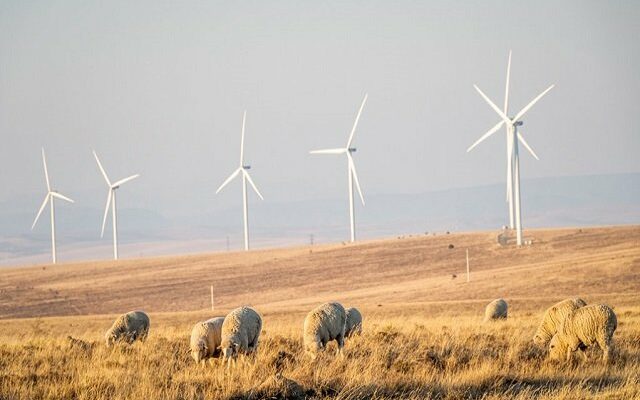 That’s it! The Golden Valley Wind Farm is now operational. After two years of work involving the efforts of 500 people, the facility went into commercial operation on May 1st, 2021. The wind farm is built on 9 000 hectares of agricultural land, about 5 km from Cookhouse, in the local municipality of Blue Crane Route, Sarah Baartman District, Eastern Cape Province.

Golden Valley consists of 48 turbines supplied by the Chinese company Goldwind. The wind farm has a capacity of 123 MW and the electricity is evacuated via an on-site substation and a dedicated 132 kV power line connected to Eskom’s Kopleegte substation. The South African state-owned utility has signed a 20-year power purchase agreement (PPA) with the project developer, independent power producer (IPP) BioTherm Energy. The company, which is majority-owned by UK investment company Actis, developed the project in partnership with Thebe Investment Corporation (TIC), which owns 37.5% of the Golden Valley wind farm.

“Thebe’s investment, alongside BioTherm Energy, demonstrates our commitment to growing our portfolio of renewable energy assets and making a positive contribution to our country, as well as fulfilling our mandate of ‘building communities’ to make a significant economic impact in South Africa,” says Sunil Ramkillawan, chief executive officer of Thebe Energy and Resources.

The Golden Valley Wind Farm is capable of producing over 477 GWh annually, equivalent to the electricity needs of approximately 120,000 South African households. Like other renewable energy providers operating in South Africa, BioTherm Energy has a community development programme in place in the Eastern Cape. “Golden Valley Company is committed to donating a percentage of its revenues to the community in the form of investments in socio-economic and business development. We are also in the process of establishing a trust that will be owned by the community. Through these initiatives, we are committed to investing in areas of real need that have a long-term sustainable impact,” says Robert Skjodt, BioTherm Energy’s CEO.

The Golden Valley wind farm was built under the fourth bidding window of the Renewable Energy Independent Power Producer Procurement Programme (REIPPP). Under this programme designed to attract IPP investment to South Africa, BioTherm Energy has built other clean energy facilities in the country.

Together with its partner TIC, IPP commissioned the 33 MW Excelsior wind farm in the Western Cape. BioTherm Energy also owns two solar photovoltaic plants in the Northern Cape. These are the 46 MW Aggeneys plant and the 86 MW Konkoonsies II plant. These four plants inject 284 MW into Eskom’s power grid, thanks to an overall investment of 6.5 billion South African rand, or more than 450 million dollars.