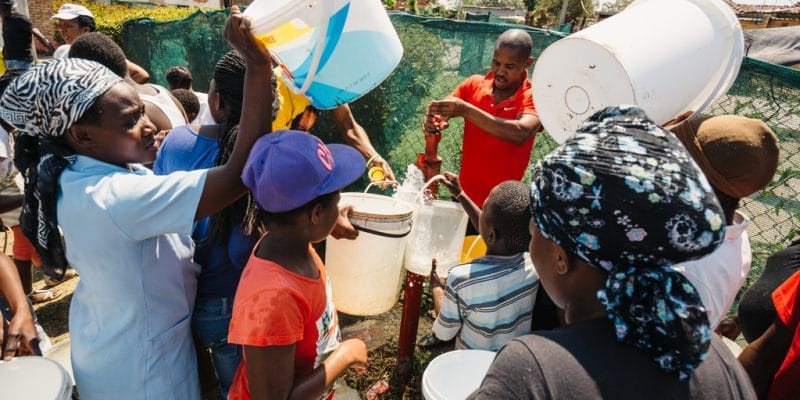 The South African government is commissioning three boreholes in Ga-Mopedi, in the local municipality of Ga-Segonyana, Northern Cape Province. The facilities pump water from groundwater to supply 2,000 households, or over 7,000 people in this part of South Africa.

The new water supply facilities have been operational since June 30th, 2021. Of the three boreholes, two have been rehabilitated. The third borehole was constructed to support the existing facilities in Ga-Mopedi, in the local municipality of Ga-Segonyana, Northern Cape Province, South Africa. The three boreholes pump water from the water table and store it in a steel tank with a capacity of 15 m3.

The drinking water is then piped through a 3.5-kilometer reticulation pipeline to serve 2,000 households, or over 7,000 people, through 15 standpipes. The water project in Ga-Mopedi township cost 15 million South African rand (about $1 million) to implement.

The new facilities are expected to help reduce drinking water shortages in Ga-Mopedi. The South African government plans to invest more in water supply projects in the coming years. According to its Water and Sanitation Master Plan launched in 2019, 900 billion South African rand (nearly $62.3 billion) will be allocated to such projects over 10 years.

Wildlife in South Africa is also suffering from water shortages. The main cause of this phenomenon is the scarcity of rainfall, which leads to drought. This phenomenon is linked to climate change. To overcome the water shortage in the rainbow nation, the authorities are also relying on unconventional water resources. In the Eastern Cape, a seawater desalination plant will soon be built. The plant will be in Nelson Mandela Bay and will have a capacity of 15,000 m3. The drinking water supply project will benefit 1.25 million people.