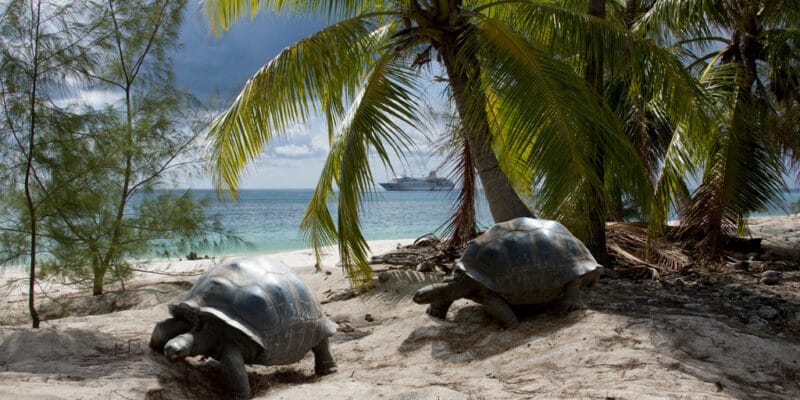 The European Union (EU) and the Organisation of African, Caribbean and Pacific States (OEACP) have signed a US$118,000 grant to fund biodiversity conservation on the Aldabra Atoll in Seychelles. The Seychelles Islands Foundation (SIF) will use the grant to combat invasive species.

The Seychelles Islands Foundation (SIF) has funds to preserve the biodiversity of the Aldabra Atoll in the Seychelles. The organisation recently received a grant of US$118,000 (approximately 1.77 million Seychelles rupees) from the European Union (EU) and the Organisation of African, Caribbean and Pacific States (OECP), under the Biodiversity and Protected Areas Management (Biopama) programme.

The funding from the EU and OEACP will mainly be used to combat the invasive species that are degrading the Aldabra Atoll. “We encounter yellow crazy ants at various supply boat loading sites in Aldabra. These species are having a devastating effect on the wildlife,” says SIF, an organisation led by Frauke Fleischer-Dogley.

A treasure trove of biodiversity

In addition to yellow crazy ants, the Aldabra atoll is overrun by brown rats, goats, pigs, chickens and a species of mealy bug. These animals cause a lot of damage to bird, turtle and tree populations. Added to this are rising sea levels, rising sea surface temperatures, coastal erosion and overfishing.

The Aldabra Coral Refuge is home to over 400 endemic species and subspecies as well as bird colonies. These include the world’s largest population of giant tortoiseshells, numbering more than 100,000 individuals according to the United Nations Educational, Scientific and Cultural Organization (UNESCO). In the colony of birds that nest on this Indian Ocean atoll, there are two endemic species (the Nesille and the Drongo) and eleven subspecies, including Cuvier’s rail. Aldraba Atoll is also home to some forty endemic plant species.

The FIS project supports other initiatives to safeguard the rich biodiversity of Aldabra Atoll. This reef has had the status of a nature reserve since 1981. The atoll is also a UNESCO World Heritage Site and has been a Ramsar site of 439 km2 since February 2nd, 2010.