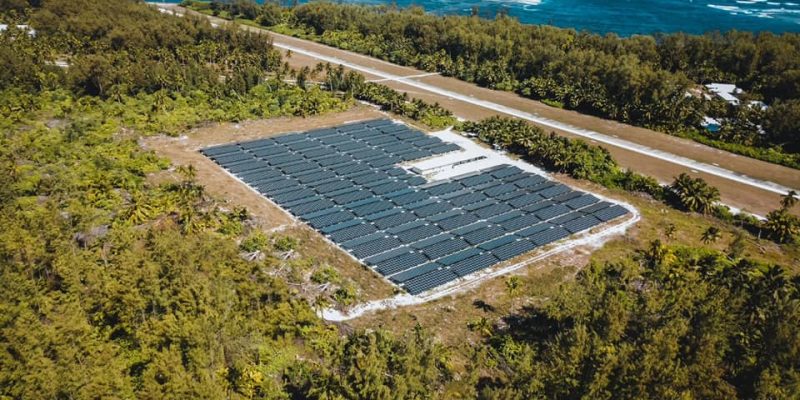 A 2.5 MWp solar power plant is going into operation on Desroches Island in the Seychelles. The installation is operated by the South African company Sustainable Power Solutions (SPS), which has already completed several similar projects in the archipelago.

Sustainable Power Solutions (SPS) is expanding in the Seychelles. The renewable energy provider based in Stellenbosch, South Africa, is commissioning a solar photovoltaic power plant in Desroches, an island in the Amirantes group in the Seychelles. This is the second largest PV plant in operation in the country, with a capacity of 2.5 MWp.

“IDC only spent money to build the pillar on which the PV panels rest and the building that houses the equipment. We are simply buying electricity at a cost of $0.19 per kilowatt, compared to $0.42 when the generators were running,” explained Glenny Savy, the general manager of the Islands Development Company (IDC) at the inauguration ceremony of the solar plant a few days ago.

The inauguration ceremony of the plant was presided over by the Seychelles Head of State Wavel Ramkalwan. His move reflects a political will to reduce the consumption of fossil energy such as oil, which is necessary for the production of electricity in most of the islands of Seychelles. Given the geographical aspect of this country located off the coast of East Africa, it is almost impossible to set up a unified national electricity network.

Most of the 115 islands and islets that make up the Seychelles operate on mini-grids, often powered by electricity generated from fuel oil. The Seychelles government, through the IDC, is betting more on renewable energies, especially solar. By 2030, 15% of the electricity consumed in the islands will be produced from clean sources. Currently, only 5 percent of electricity generated is from renewable sources, according to IDC.

“IDC has proposed a solution to independent power producers that provide competitively priced electricity without the heavy upfront financial burden that most people complain about when they talk about renewable energy. This is the kind of experience that should be shared with different partners to help them increase the use of renewable energy on their island,” says Flavien Joubert, Seychelles’ Minister of Climate Change and Energy. The IDC plans to facilitate the installation of solar power plants on Poivre, Marie-Louise and Desnoeufs islands. A modular system of 50 kWp should provide electricity very soon on Coetivy Island.