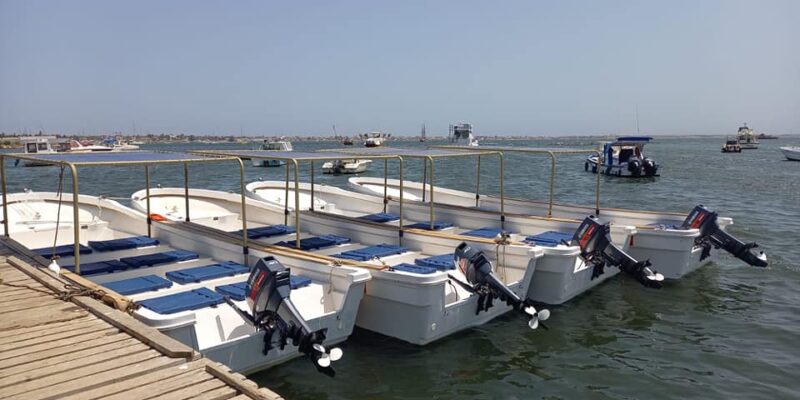 In Senegal, the Ministry of the Environment and Sustainable Development, Abdou Karim Sall has four new motorised boats to ensure the preservation of biodiversity in marine protected areas (MPAs). This equipment was acquired thanks to funding of 66 million CFA francs (over 100 600 euros) from the French Development Agency (AFD).

The French Development Agency (AFD) supports the preservation of marine protected areas (MPAs) in Senegal. The development finance institution has granted 66 million CFA francs (more than 100,600,600 euros) to the Senegalese Ministry of the Environment and Sustainable Development for the acquisition of four motorised boats.

Thanks to this new navigation equipment, Abdou Karim Sall’s ministry is improving the monitoring of Senegal’s MPAs, thus contributing to the preservation of marine biodiversity and the natural capital of Senegal’s coastal areas.  These areas are made up of (mangroves found particularly in the Sine Saloum and in Casamance, etc.). Mangroves are of considerable environmental importance. According to scientists, their capacity to capture CO2 is much greater than that of terrestrial forests. Located along coastlines, lagoons, rivers or deltas, these salt-tolerant evergreen forests are also habitats for many species of fish and seabirds.

The vulnerability of MPAs to climate change

In 2020, Senegal added three new addresses to its Community Marine Protected Areas map. New sites in biodiversity areas have been created in Somone in the Mbour division, Kaalolaal Blouf in the  Bignoma and Gorée divisions, an island in the bay of Dakar. The West African country now has a total of 14 community marine protected areas. In addition to overfishing, climate change is threatening the integrity of these MPAs.  in Senegal. This phenomenon is accentuated by the uncontrolled cutting of wood in marine areas, contributing to the imbalance of these already fragile environments.

According to a report by the Senegalese Agency for Statistics and Demography (ANSD), Senegal had 6.3 million hectares of natural forests in 2007, compared to 11 million at the time of independence in 1960. According to the same source, between 2005 and 2010, the forest cover showed an average annual loss of 40,000 hectares. Senegal’s forest potential has been severely degraded by consecutive droughts, but especially by deforestation. “The production of firewood, for example, stood at 116,507 steres (one stere is equivalent to 1 m3, editor’s note) in 2013, compared to 80,864 steres (a unit of measurement for large quantities of firewood or other wood cut) in 2012,” says the ANSD.