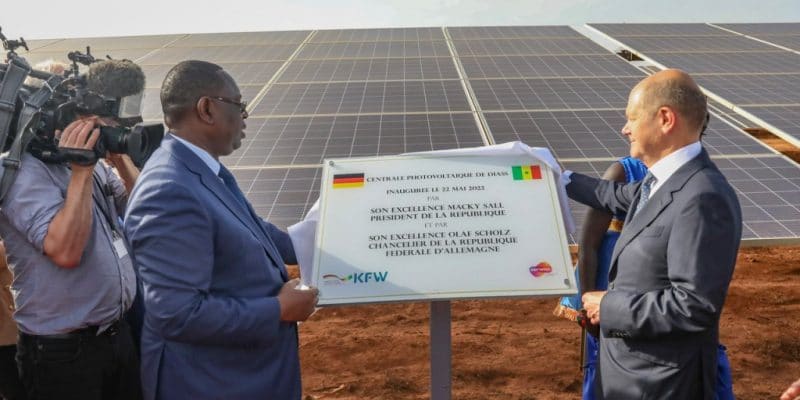 The Senegalese government recently inaugurated the Diass solar power plant located 40 km south-east of the capital Dakar. The installation, which has a capacity of 23 MWp, was financed by the German Development Agency (KfW).

On the sidelines of his recent mini-tour of Africa, the German chancellor took part in the inauguration of a photovoltaic solar power plant in Diass, a village located 40 km southeast of the Senegalese capital Dakar. If Olaf Scholz was invited to the ceremony by Senegalese President Macky Sall, it is because his country is the main financial backer of this project carried out by the Senegalese National Electricity Company (SENELEC).

The power plant, located in the department of M’bour, is equipped with 85,248 polycrystalline photovoltaic modules installed on a 32-hectare site. Equipped with a network of inverters (8) and transformers (16), the Diass solar power plant has a capacity of 23 MWp. The park is connected to Senegal’s national electricity grid from the Kael substation owned by SENELEC. The construction of the solar park was financed with a loan from the German development agency Kreditanstalt für Wiederaufbau (KfW).

The plant has been designed to operate for 25 years. According to the authorities, the plant is capable of supplying 33,000 Senegalese households. Its commissioning will reduce the use of fuel oil in thermal power plants. SENELEC is expected to save 1.7 billion CFA francs (about 2.5 million euros) per year.   “This project is part of the electricity mix advocated by the State of Senegal and contributes to increasing the share of renewable energy on the SENELEC network and significantly to the supply/demand balance,” says the public company.

Currently, Senegal has an installed capacity of 1,555 MW according to Power Africa. Although its electricity mix is still largely dominated by fossil fuels, this West African country has made remarkable progress in terms of renewable energy development. In addition to acquiring 112 MW of installed solar capacity, Senegal is also focusing on wind and biomass.