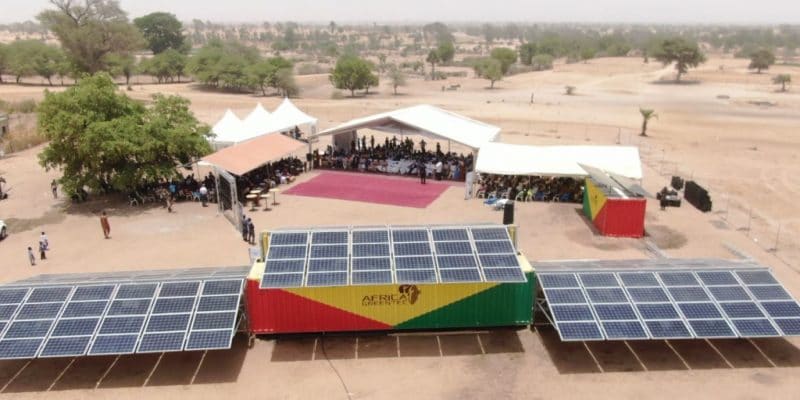 German start-up Africa GreenTec is continuing its expansion in West Africa with the commissioning of an ImpactSite in the village of Ndiob in Senegal. It is a set of facilities providing essential services thanks to solar photovoltaic energy.

Africa GreenTec is bringing a different vision of electrification to Senegal. The start-up based in Hesse (Germany) has just launched an ImpactSite in Ndiob, a locality located in the centre-west of Senegal. In contrast to the conventional solar mini-grids deployed on a massive scale in sub-Saharan Africa, the technology presented by Africa GreenTec offers other essential services needed in rural areas of Africa.

The solar energy also powers a SatCom (Internet) system, as well as a cold storage room, a boon for food preservation in this village where people live mainly from small-scale farming. The new facility is expected to provide clean electricity and other essential services to 3,000 people.

Read also- SENEGAL: Coperes joins forces with ARE for electrification via renewable energy

This is a real impact project, and the inauguration ceremony took place recently in the presence of several personalities, including the Senegalese Minister of Local Government, Development and Regional Planning, Oumar Gueye, the Director of the Senegalese Rural Electrification Agency (ASER), Baba Diallo, and the German Ambassador to Senegal, Sonke Siemon. The Ndiob ImpactSite was set up with the support of several Africa GreenTec partners, including connect2evolve.

Financing via the blockchain

“connect2evolve is an initiative of Siemens Energy employees, supported by Siemens Energy Ventures, the entrepreneurial heart of the German group. The initiative aims to implement a solution that brings together people who want to make an impact and those who need access to clean, reliable and affordable electricity. For the Ndiob project, connect2evolve used blockchain to finance the installation of the solar mini-grid.

Specifically, through a dedicated platform, “donors will get an impact token that represents the amount of green electricity produced thanks to their funding. The token also represents the reduction of CO2 emissions or partial CO2 savings, when a diesel generator could be replaced,” says Siemens Energy. This project also contributes to strengthening the impact of Africa GreenTec in rural areas in West Africa. The company co-founded by Torsten and Aida Schreiber has already electrified 20 villages, mainly in Mali and Niger.