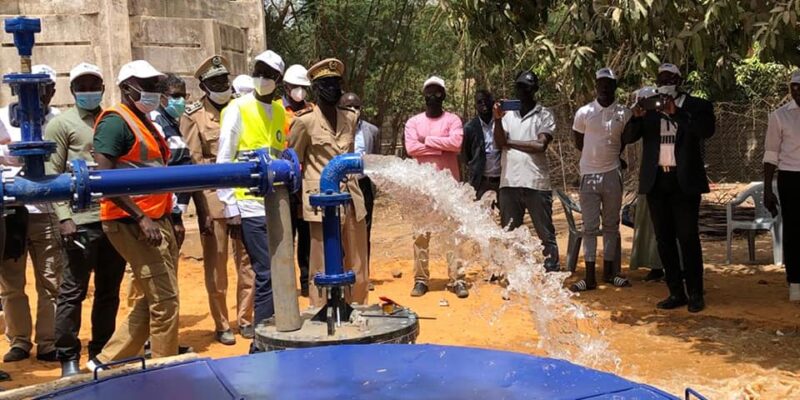 In Senegal, the Nguékhokh council has just been connected to the network of Sen'Eau, the company that operates and distributes drinking water in urban and peri-urban areas. The work was carried out by the Société nationale des eaux du Sénégal (Sones).

With a view to improving the supply of drinking water to Nguékhokh, a municipality in the Mbour division, the Société nationale des eaux du Sénégal (Sones) has built a 1,100 m3 capacity water tower. The installation supports an existing water tower, which has a capacity of 220 m3. Sones also laid an additional 56 km of pipe, reinforcing the existing 20 km. The Nguékhokh water towers are supplied by two boreholes. These installations have a total capacity of 5,060 m3 per day.

The new water supply system supplies more than 60,000 people in Nguékhokh and some surrounding localities. Sones has also connected Nguékhokh to the network of Sen’Eau, the company that operates and distributes drinking water in urban and peri-urban areas in Senegal. The extension of the drinking water network has enabled 5,000 social connections to be made.

The State of Senegal has released 3.2 billion CFA francs (approximately 4.9 million euros) to strengthen the supply of drinking water in the Nguékhokh council. The work is part of the Urban Water and Sanitation Project (PEAMU), implemented by Sones since 2015. The drinking water component of the project has five components, namely the complementary emergency programme for the supply of drinking water to Dakar from Tassette, the reinforcement of the water supply to the Petite Côte and the incorporation of Nguékhokh, the programme for the creation of 20,000 social connections, support for the implementation of the desalination project on the Grande Côte and support for the creation of a master plan for the supply and distribution of the Dakar-Thiès-Petite Côte triangle.