Homepage » SENEGAL: Opening of a trial against a fishmeal factory in Thiès

SENEGAL: Opening of a trial against a fishmeal factory in Thiès 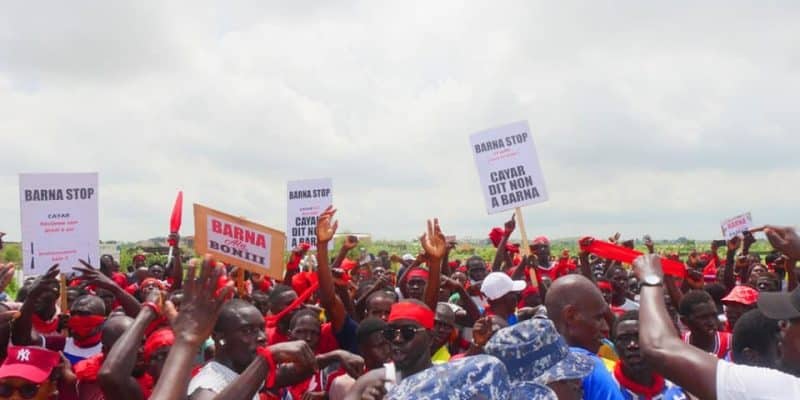 The fishermen of Cayar, north of Dakar in Senegal, are determined in their fight for the closure of the fish meal factory "Touba Protéine Marine", for its impact on the environment. After going to court in Senegal to have the factory closed, the trial was postponed until October 6, 2022.

In western Senegal, a community of fishermen decided to fight the polluting fishmeal industry. After several letters informing the public authorities about the environmental ravages of the “Touba Protéine Marine” (ex-Barna Senegal) factory, the people of Cayar are moving into high gear.

Grouped within the “Collectif Taxawu Cayar”, the women processors, fishermen and fishmongers of Cayar filed a complaint on September 19, 2022, before the High Court of Thies, to demand the closure of the Touba Protéine Marine fishmeal factory, installed in the locality since 2018. After a first hearing on September 22, 2022, the Judge of the High Court of Thies granted the defense lawyers a postponement of the trial to October 06, 2022, to better prepare the case.

“This trial is unprecedented. Trials of this type are rare in our country, or even in most African countries. This is a historic moment for our institutions to protect the environmental rights of local communities when they are violated by companies that are driven only by profit,” said Mr. Ciré Bathily, lawyer of the Taxawu Cayar Collective.

According to Allé Sy, a member of the Taxawu Cayar collective, the “Touba Protéines Marine” factory is severely damaging the living environment of the inhabitants. He denounced “the discharge of wastewater from the factory into Lake Mbawane, which is connected to the groundwater of the borehole that supplies the local population with drinking water. This situation is very alarming and worrisome because the water from this borehole gives off a nauseating odor.

Supported by the nature protection organization Greenpeace, the collective “Taxawu Cayar”, intends to lead the ultimate fight against “Touba Marine Proteins”. The denunciation campaigns carried out in the past had already pushed the Spanish company Barna to sell its shares in the Cayar factory to the local management team.

Read also-WEST AFRICA: Greenpeace calls for fishmeal plants to be shut down

A World Food Programme (FAO) task force report notes that the main fish species targeted by the fishmeal and fish oil industry are “overexploited” and that “the depletion of small coastal pelagic stocks poses a serious threat to food security” in West Africa. In a report released in September 2019, coastal community representatives and Greenpeace Africa warn of the negative impact of declining fish stocks on the livelihoods of the 825,000 people in Senegal who derive their income from fishing.