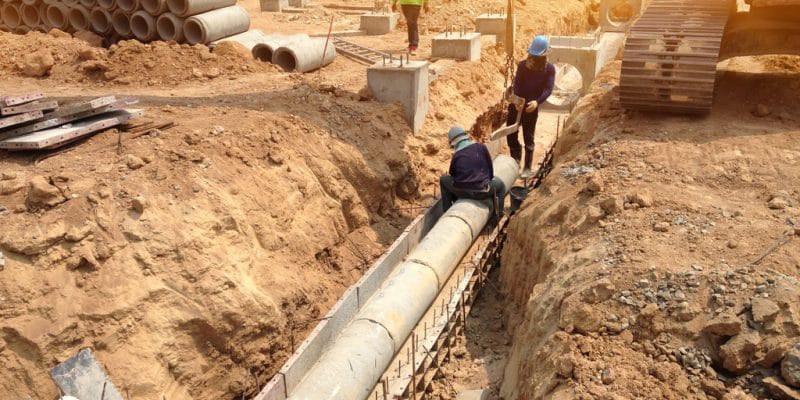 According to Charles Fall, the general manager of the National Water Company of Senegal (SONES), the Keur Momar Sarr drinking water plant will be delivered by 2020. It will be able to provide 200,000 m3 of drinking water per day.

The project to build a third drinking water plant in Keur Momar Sar has made good progress. This is the observation made by Charles Fall, the general manager of the National Water Company of Senegal (SONES). He visited the construction site, which is about 250 km from Dakar the capital of Senegal. Charles Fall was accompanied by representatives of several consumer associations from Senegal.

At the end of this field trip, the director of the SONES indicated that 60% of the work has been completed “and at this rate, it can be delivered in 2020”. The work is being carried out by three French companies: an auxiliary company for water distribution (dubbed SADE in French), Eiffage and Sogea-Satom. They are assisted by at least six Senegalese companies. The plant will provide 200,000 m3 of drinking water per day.

Several municipalities benefiting from the project

The treated water in the Keur Momar Sarr plant will be pumped into Lac Guiers. Located on the Senegal River delta, it is a freshwater lake, the largest in the country, with an area of 170 km3. According to the government, the project to build a third drinking water plant in Keur Momar Sarr aims to cover, by 2025, the drinking and industrial water needs of the Louga, Thiès and Dakar regions, with particular emphasis on the localities along the Guiers Lake pipeline. It also aims to strengthen the water supply for multi-use in the project area and to ensure the financial balance of the urban water subsector.

The ongoing project also includes the construction of 213 km of pipes with a diameter of 1.5 m between the small municipality of Keur Momar Sarr and the new city under construction in Diamniadio, near Dakar. Before arriving in the capital, the pipeline will benefit the municipalities of Ndande, Tivaouane, Kébémer, Thiès, as well as the villages around Lac de Guiers.

In addition, the companies implementing the project will build two storage tanks of 10,000 m3 each in Thiès, as well as three distribution tanks in the same city, at Blaise Diagne International Airport and Diamniadio.

Once in Dakar, the water conveyed by the pipeline will make it possible to “absorb the water deficit in certain districts that until then had no 24-hour water supply”. To do this, the drinking water distribution network will have to be deployed over 1,000 km. The pipeline will thus extend access to drinking water to an additional 680,000 people in Dakar, thanks to the 85,000 social connections programme provided for by the project and. In all, the plant is expected to supply 3 million people.

The total cost of the project is CFAF 274 billion (close to €418 million). It is financed by the Government of Senegal through loans from the World Bank, the African Development Bank (AfDB), the Islamic Development Bank (IDB), the European Investment Bank (EIB) and the French Development Agency (AFD).