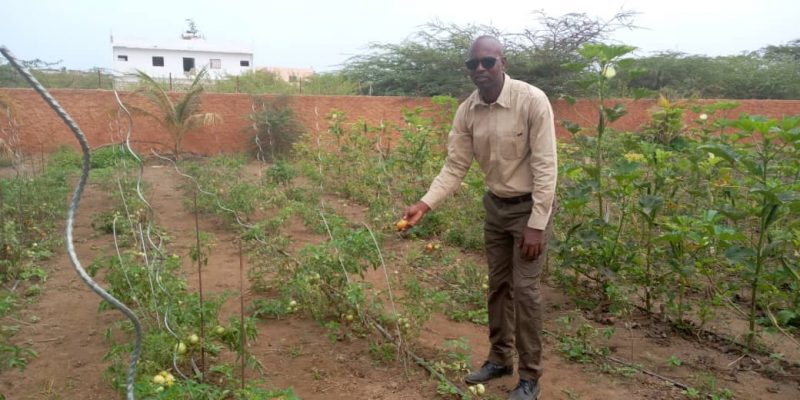 In Toubab Dialaw, a Senegalese village on the Petite-Côte south of Dakar, a young Senegalese man has set up an ecological school farm, in which he practises 100% organic agriculture. Since its launch in 2016, this activity has enabled it to train more than 150 Senegalese and to sell tons of organic products on the market.

He thought it was impossible to succeed but today his passion has made him a source of inspiration for African youth. This is Abdoul Rahim Ba, a young Senegalese farmer. In the commune of Toubab Dialaw, south of Dakar, Rahim has managed to tame the arid land by creating his ecological garden. He started with a surface area of 300 m2, and his farm school now extends over four hectares of land. The young man, who is passionate about organic farming, grows a little bit of everything. Tomatoes, corn, vegetables, a host of fruit trees, etc. He also raises bicycle chickens, geese and ducks. Rahim works without chemical fertilisers, and offers 100% organic products on the market, a type of product that has become rare on the Senegalese market. A West African country where, because of the scarcity of rainfall, farmers very often use fertilisers and other chemicals to boost yields. This strategy has an impact on the environment and human health.

In his garden, which he called “ferme des 4 chemins” (“4 paths farm “) or  “ecological oasis “, Rahim now works with 5 employees, all with a salary. The term “4 paths” means “Education, Health, Environment and Sustainable Development”. One of the great successes of this young entrepreneur and gentle thinker is found in the hundred or so women he trained in 2017 in ecological farming techniques. Today, these women produce vegetables on two hectares of land and market them in the city. In three months (from April 2017 to July 2017), they farmed 3000 m2 of land and harvested nearly two tonnes of vegetables. After the sales, they made a profit of one million CFA francs, or nearly 1500 euros. A treasure for these women, most of whom come from low-income families.

He has also trained 64 other young people in four years, who are now working to promote ecological agriculture in Senegal. The entrepreneur has also established a system that allows him to establish direct contact with the consumer. He set up the Biodialaw network. Every month, he organises exhibitions on his farm with his network of “students”, where Senegalese people come from all over the country to get supplies.

Rains are rare in Toubab Dialaw, yet Rahim grows crops throughout the twelve months of the year through irrigation. He installed a water well that works with a solar photovoltaic system. The system can produce 60 m3 of water per day, but on the farm they have chosen to use only 20 m3, in order to spend as few resources as possible.

Three years after his project was launched, Rahim says he is proud of what he has achieved, but has not stopped dreaming. “In the coming years, I want to establish a daily market for ecological products,” he says. It may be described as a confident step towards its initial goal of “demonstrating that in Africa, people do not have the right to be poor.”