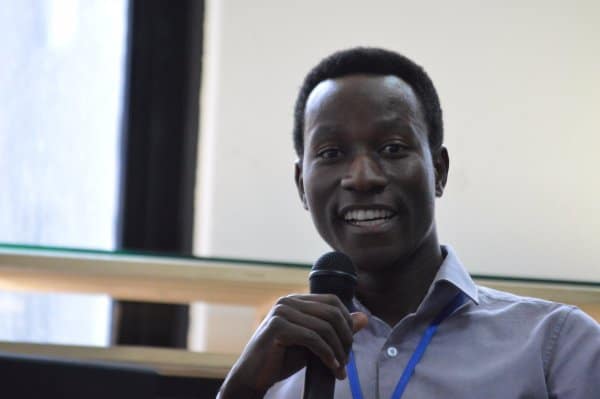 Jean Bosco Nzeyimana, 24, runs Habona Ltd, a company that manufactures biomass briquettes and biogas. Paul Kagame's country and Uncle Sam's country are of course the talk of the town.

Jean Bosco Nzeyimana was born in Kitabi, a small village in the Nyamagabe district (southern Rwanda). As he likes to recall, his village lacked everything during his childhood. He had no access to electricity, nor domestic gas. To cook, the villagers collected wood in the forest. It was an activity that kept the children busy.

By then with the rains, collecting the wood becomes very complicated: the forest is difficult to access and the wood proves too wet. It was in these circumstances that Jean Bosco Nzeyimana understood the need to find a much more lasting solution. After his business studies, he decided to fulfill his dream by creating Habona Limited in 2014, a company that transforms waste into energy. He was then 19 years old.

From biomass briquettes to biogas

From the very beginning, he focused on manufacturing biomass briquettes, a fuel intended to replace charcoal that contributes to deforestation. It is obtained from the recycling of plastic waste, which facilitates combustion. Part of the waste that the company collects is used to produce compost and makes it available to farmers. To facilitate waste recovery, the 24-year-old boss employs 20 people who separate biodegradable and non-degradable waste and about 50 other who collect it part-time. The success of this part of Habona Limited’s activity pushed him to explore another universe, biogas production.

The principle is simple: allow each family to produce its own biogas. To do this, his company installs digesters that allow individuals to transform organic waste (produced by animals in particular) into biological gas.

Today, his ambition is to diversify his company’s offer in clean energies. Habona Limited is currently involved in the installation and maintenance of green energy production sites (solar and wind) and ecological agriculture. According to Forbes magazine, which has just ranked him among the 30 most promising young African entrepreneurs, Habona Limited is also getting ready to launch into hydraulics.