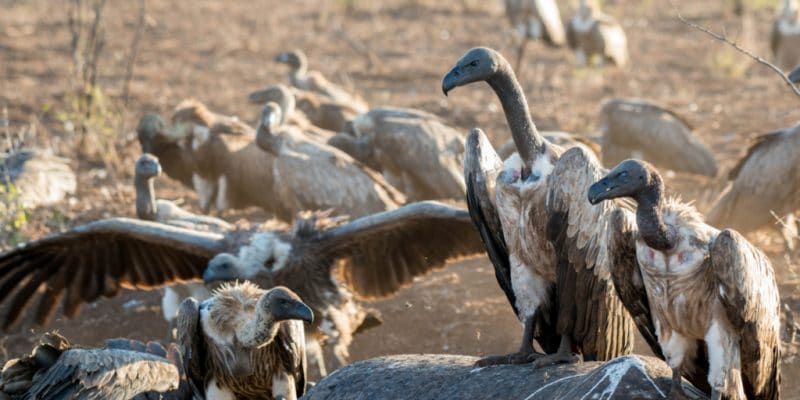 A panel of experts took turns on May 8, 2019 in Lagos, Nigeria, to highlight the need for the federal government to intensify wildlife protection legislation, similar to that of vultures. The giant bird of prey is seriously endangered in Nigeria, where its body is used for ancestral purposes.

In Africa, and particularly in Nigeria, crimes against vultures have reached the alert coast. These giant birds have declined at rates ranging from 70% to 97% over three generations, a time interval used by the International Union for Conservation of Nature (IUCN) to assess the threat status of species. Six of the eight existing species are mainly found in Africa, although they are seriously threatened. Their decline is continuing and IUCN considers that they are likely to be qualified as “critically endangered”.

The situation was described on Wednesday, May 8, 2019 in Lagos, at a workshop organised by the Nigerian Conservation Foundation (NCF), in partnership with BirdLife International, an international NGO dedicated to the protection of nature and birds in particular. Conservation experts are outraged that Nigeria has become a focal point for the illegal vulture trade. States such as Osun, Oyo, Ogun in the southwest and Kano, Sokoto and Katsina in the north, are the hot spots for the trade. In those territories, the birds of prey are poisoned by bait. Their body parts are then used in traditional medical practices, or sold on the black market, whose ramifications extend throughout Africa.

The importance of vultures for ecosystems

Vultures, like other birds, play an essential role in maintaining healthy ecosystems. This is why their disappearance could have a serious impact on other species and on many of nature’s benefits. “In addition to depriving the African skies of one of their most famous and spectacular bird groups, the rapid decline of the continent’s vulture population has profound consequences for the population, as vultures serve to stop the spread of disease by cleaning decaying carcasses,” said Julius Arinaitwe, Director of BirdLife International’s programme in Africa last Friday.

However, experts believe that it is still possible to protect them in the future. To do this, wildlife advocates work with legislators, government agencies and local populations. After calling on the government to toughen wildlife protection legislation, Dr. Muktari Aminu-Kano, Executive Director of the NCF, said the foundation was conducting an awareness campaign among traditional doctors on alternatives to vultures, based on medicinal plants, and was seeking the collaboration of security agencies to enforce the laws.

In addition, stakeholders in this workshop supported by the United States Fish and Wildlife Service (USFWS, a U.S. federal agency involved in wildlife management and conservation) funded a two-year project entitled “Combating the illegal West African trade in threatened vultures and their parts for belief purposes”.